The KC-46 tanker program faces potential budget issues that could
force a renegotiation of the U.S. Defense Department’s contract with
Boeing, according to budget analysts.
The program, considered a
future cornerstone of the Air Force, is being squeezed by both current
funding levels and a potential sequester.
DoD planned to spend
$1.8 billion on the tanker program in fiscal 2013. However, Congress has
failed to pass a new budget, leaving programs funded under a continuing
resolution that leaves financial support at 2012 levels. For the KC-46
program, that means making do with just $900 million, or half of what
the program office had planned for this year.
That presents a
major problem for the aerial tanker program, said Todd Harrison, a
budget expert with the Center for Strategic and Budgetary Assessments.
The
KC-46 is particularly vulnerable, Harrison said, because it is still in
the development stage, where budgets are slated to ramp up
significantly year to year. But there is also concern that spending cuts
could force the government to change a contract that is considered very
friendly to the Pentagon.
The KC-46 contract is capped at $4.9
billion, with a floor of $3.9 billion. The Air Force is responsible for
60 percent of those costs and Boeing for 40 percent; anything above $4.9
billion is paid for solely by Boeing. If the Air Force, due to the
continuing resolution, cannot meet its funding requirement for fiscal
2013, Boeing could face a choice — paying out of pocket to maintain
planned spending levels, or slowing down the tanker’s development.
The
Air Force, in turn, could find itself forced to choose between delaying
development, which would drive up per-unit cost, and renegotiating its
contract with Boeing — something DoD would desperately like to avoid.
“The
USAF will be bending over backwards not to damage this contract, so I
rather think the program managers will muddle through,” Rebecca Grant,
an analyst with the Iris Research Group, said in an email.
But in a
worst-case renegotiation, “Boeing might have an opening to increase the
price, due to overall cost increases in the supply chain or their own
share,” she wrote. “Anyway you look at it, delay adds cost. The question
is how much.”
The tanker aircraft program, like the rest of the
federal government, is also facing the threat of steep cuts under
sequestration. For a growing program already operating at half cost
under a continuing resolution, the added hit from automatic budget cuts
would be a “disaster,” said Harrison, who warns it could force DoD to
renegotiate with Boeing on the program.
The thought that sequester
could force the Pentagon to work out a new deal with Boeing was first
raised by a DoD official last September.
“I don’t want to break my
contract, and I’m fearful sequestration may force me to do that,” Maj.
Gen John Thompson, the KC-46 program executive, said at the Air Force
Association conference in National Harbor, Md. “If I have to break my
fixed-price contract, then I stand the potential to lose out on some of
the great things that we put in this vehicle up front.”
Boeing directed request for comment on the tanker program to the Air Force.
“The program is not impacted under the current [continuing resolution],” Air Force spokeswoman Ann Stefanek said in an email.
Both
Grant and Harrison are quick to agree that operating under the
continuing resolution is not a death sentence for the program. If DoD
can work a new budget so that the program reaches that $1.8 trillion
figure by the end of fiscal 2013, there should be little impact.
But the longer the government operates at last year’s funding levels, the greater the risk to the program, Harrison warned.
“There's
still room to avoid the most devastating effect on this program, but
that window is narrowing,” Harrison said. “But if sequestration happens,
all bets are off.

The
Air Force and Boeing are relying on an "active" program to reduce the
KC-46A tanker's weight, which is posing a technical challenge that --
if not remedied -- could erode the aircraft's ability to meet mandatory
operating requirements for takeoff, mission radius and landing,
according to government and industry officials.


First flight of the 767-2C, meanwhile, remains on track for June 2014, Boeing says, while first flight of the fully configured KC-46A is still set for January 2015. Based on the 767-200ER baseline design, the -2C includes a strengthened main-deck cargo floor, cargo door and freighter features, 787-based cockpit display system, auxiliary body tanks for increased fuel carriage and provisioning for the plumbing and wiring required for the refueling mission systems.

Boeing will use the four test aircraft as part of a combined effort to earn two separate certifications from the FAA, the first of which will be an amended type certificate for a 767-2C “provisioned freighter” without the aerial refueling system and associated military avionics and self-defense systems planned for the tanker. Boeing will then apply for a supplemental type certificate (STC) for a fully equipped KC-46A.


There is a "high risk" that the Boeing KC-46A tanker will not be ready in time for its initial operational test and evaluation (IOT&E) in 2016, a report to Congress disclosed on 29 January.

According to the annual report by the US Director of Operational Test & Evaluation (DOT&E), IOT&E for the KC-46A is expected to be delayed by six months to a year.

Boeing is currently putting the finishing touches to the first of four test platforms that have been contracted under the USD3.9 billion engineering, manufacture, and development phase of the US Air Force's (USAF's) KC-X programme, with the remaining three now in varying stages of production at the company's 767 airliner line at Everett, near Seattle in Washington.

As they stand, the programme timelines will see the four test aircraft begin rolling off the production line in their 'green' 767-2C provisioned freighter configuration (but with a 767-400 flight deck and 787 large format displays) in the coming weeks, before being flown the short distance to King County International Airport (colloquially known as Boeing Field) for the fitting of the aerial refuelling components. The first flight of a fully provisioned KC-46A tanker is scheduled to take place in the third quarter of 2015.

Milestone C - authorisation for low-rate initial production - for 14 more aircraft is expected to be awarded on the back of this first flight, with IOT&E scheduled to begin in May 2016. Assuming this proceeds as planned, a decision on full-rate production for a further 161 aircraft is to be made in June 2017, to be followed in August of that year by delivery of the first of 18 combat ready KC-46As (including the four refurbished test aircraft) to the USAF.

In response to the concerns raised in the DOT&E report with regard to slippages in the IOT&E timetable, Boeing told IHS Jane's : "We remain confident in our plan to support IOT&E for the KC-46A tanker and we continue to meet our contractual requirements. Our current assessment confirms that we have a valid flight test plan in place and that we remain on plan to deliver the first 18 combat-ready tankers to the USAF by 2017." 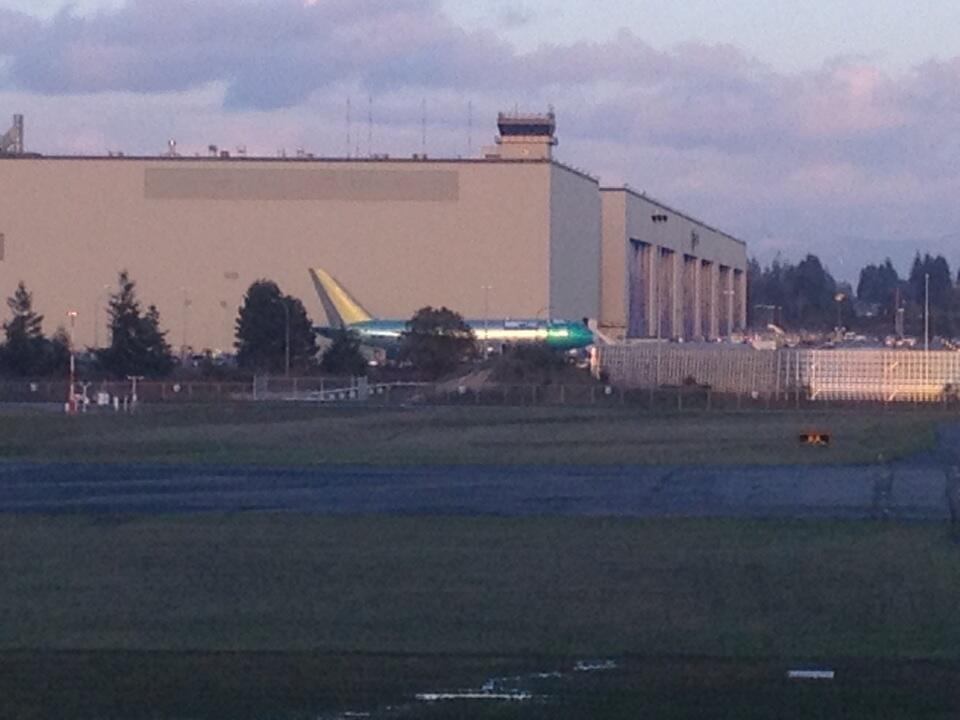 First 767 tanker out of the Everett factory pic.twitter.com/54V4EzAXsg 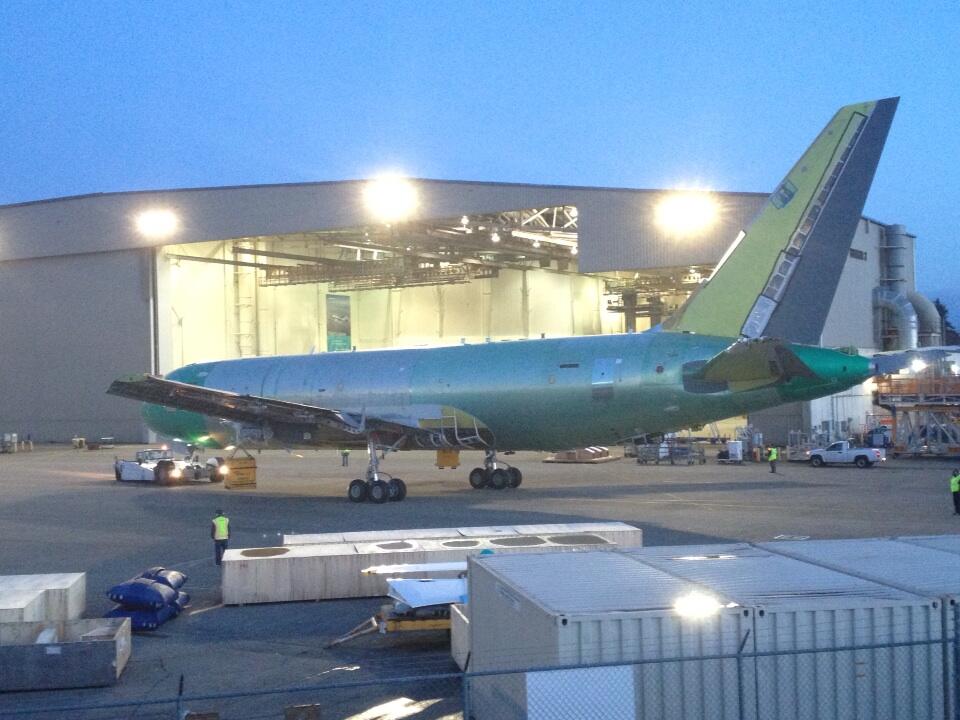 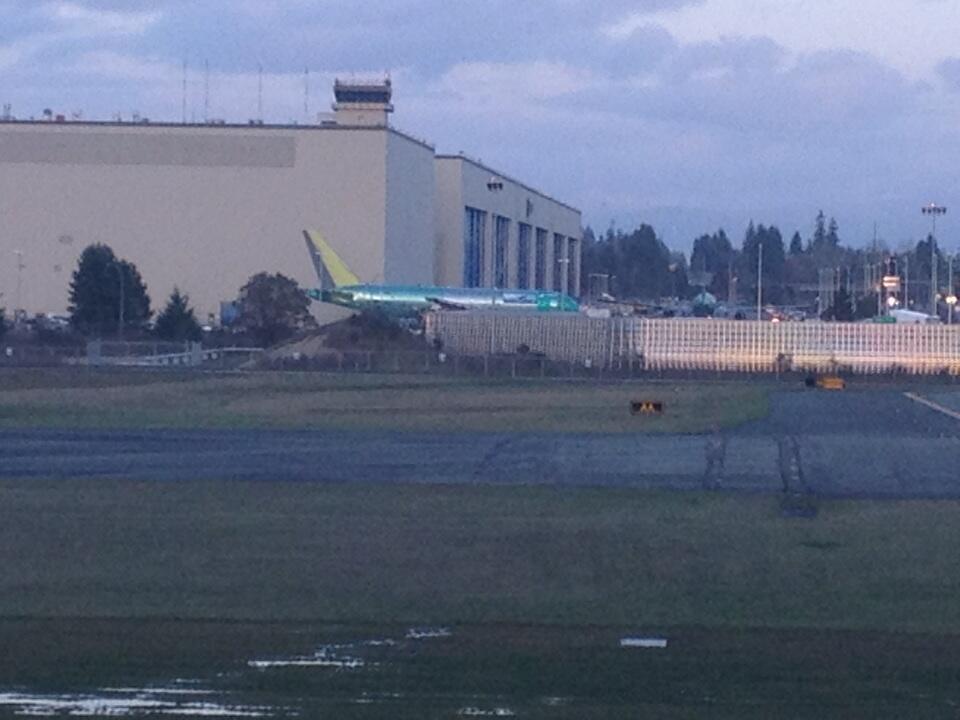 Second 767 tanker out of the Everett factory pic.twitter.com/CU8kgA6krn

"Despite this estimated increase, the government liability remains capped at the contract ceiling price of $4.9 billion, and Boeing continues to meet all contractual milestones, including the development and delivery of the four EMD aircraft," Gulick said.

Boeing said it remains on track to deliver the first 18 refueling planes by August 2017 as scheduled, despite a report from the Pentagon's chief weapons tester that warned that testing could be delayed by at least six to 12 months.
Jeannot