Delta Air Lines has unveiled plans to consolidate the customer service operations of its three
wholly-owned regional airlines, Comair, Mesaba and Compass, in a move that will create one of the country's largest regional ground handling operators.

The US major, which merged with Northwest Airlines last year, intends to create a new "regional handling subsidiary" that will assume oversight of all airport ticket counter, gate and baggage handling services in about 100 primarily small-and medium-sized airports currently managed by Comair and Mesaba.

Delta's new RHS team will be headquartered alongside Delta Connection in Minneapolis and will be led by Comair veteran Don Stephens.

"When fully operational in the third quarter of 2009, RHS will be an industry leader
serving as one of the nation's largest regional ground handling operators," says Bornhorst.

As there is minimal overlap of the Comair and Mesaba ground handling networks, Delta anticipates "no involuntary frontline reductions for employees of Comair and Mesaba as a result
of the creation of RHS, with any staffing adjustments expected to be managed through attrition and voluntary programmes", says Bornhorst.

A Delta spokesman says the consolidation is not expected to have much impact on Compass employees' jobs. "If there is any impact to them, Compass will look to offer other opportunities or a severance package," he says.

Additionally, the creation of the subsidiary is expected to have no impact to Delta or Northwest mainline jobs.

Delta Air Lines said on Thursday that it would grant voluntary buyouts to the more than 2,100 employees
requesting them, but the number of job cuts could grow as the company assesses future staffing needs.

The world's largest airline previously said it would cut capacity by 6 percent to 8 percent this year as
economic weakness erodes travel demand.

Delta, which eliminated 4,000 jobs last year though voluntary exit packages, has not offered a firm
estimate for the total number of jobs it would need to cut to achieve its downsizing.

The carrier currently has more than 70,000 workers.

"We will be thoughtful, yet decisive, in managing through this global recession," Delta said in an internal memo.

Delta, which merged last year with Northwest Airlines, announced in December the new round of capacity cuts that would be in addition to an 11 percent reduction in the second half of 2008.


Instead, the airline in a footnote noted the 18 aircraft have been excluded from its firm order obligations because "[t]he Boeing Company has informed us that Boeing will be unable to meet the contractual delivery schedule for these aircraft."


The first batch of 787-8s has also been troubled with weight issues that could limit deployment on the ultra-long-haul routes first intended by Northwest. 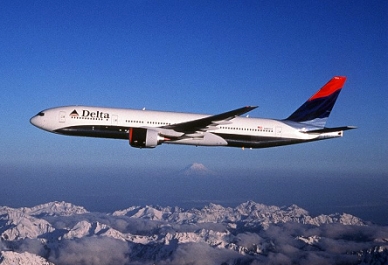 
Delta raises operating margin guidance
Tuesday September 15, 2009
Delta Air Lines now expects a 3%-4% operating margin in the third quarter, up from the 1%-3% forecast in July, and a breakeven margin for the full year, it said in a US Securities and Exchange filing released yesterday.

System load factor for September and October should be around 82%, while yield over the year's final four months is forecast to fall 11%-14% from the year-ago period. Part of the decline is due to the higher fuel surcharges imposed in late 2008. The decline in unit revenue during the third quarter will be less than that suffered in the second quarter, DL said.

The company said it expects to realize more than $400 million in merger synergies through the first nine months. Reports surfaced late last week that it is considering an investment in Japan Airlines (ATW, Sept. 14).

ATLANTA, Sept 28 (Reuters) - Delta Air Lines said on Monday that it has closed $2.1 billion of financing deals that have bolstered its liquidity by $600 million.

The company said the transactions also have addressed more than 40 percent of its 2010 debt maturities.

Delta said the financing deals were secured by liens against its Pacific route authorities, slots and gate leaseholds.

After refinancing $1.5 billion from bank credit and revolving credit facilities of its Northwest Airlines subsidiary, Delta said it will generate $600 million in incremental liquidity.


Delta Air Lines is buying 11 used MD-90 jets to add to its fleet, although the added capacity will be offset by cuts among other models.
yld_mgr.place_ad_here("right_slot");


Atlanta-based Delta is buying nine of the twin-engine planes from China Eastern Airlines and has another two used MD-90s on order from Boeing Capital.

All of the planes will join Delta's fleet this year, adding to the 17 MD-90s the airline already has. It was the launch customer for the model in 1995.

Delta did not say how much it is paying for the aircraft.

The orders will make Delta the second-largest operator of MD-90s, behind Saudi Arabian Airlines. Delta's MD-90s have 150 seats, including 12 in first class and 138 in coach.

Despite the additional planes, Delta spokesman Trebor Banstetter also said the company is not adding flight capacity amid slow travel demand. That's because it is pulling so many other aircraft from its fleet, including DC-9s inherited from Northwest Airlines and regional jets. Delta has nearly 800 mainline aircraft in its fleet.

"It's not a growth decision," Banstetter said. The addition of more of the efficient MD-90s, is "much more a fleet management type of move," he said.

"It's certainly a lot more affordable for us than if we were to, say, buy a new 737," Banstetter said. He said the MD-90s will get new interiors.

Jan 25, 2010
ATLANTA,Jan. 25 /PRNewswire-FirstCall/ -- Delta Air Lines (NYSE: DAL) will invest $1 billion, or about $300 million per year, through mid-2013 to improve the customer experience in the air and on the ground. The capital investment will improve the consistency and level of service provided to Delta's BusinessElite, First Class and elite-level flyers, as well as increasing the efficiency of the airline's fleet. Planned enhancements include:

"Delta's planned fleet and product investments mark the most significant investment we have made in our customers in more than a decade," said Delta CEO Richard Anderson. "Our premium travelers tell us that the comfort of a flat bed seat with direct aisle access, a first class experience on regional jets and in-flight entertainment are important factors in their choice of carrier."
(Logo: http://www.newscom.com/cgi-bin/prnh/20090202/DELTALOGO )
"This investment will be made while staying well within the level of our historical capital expenditures," said Ed Bastian, Delta's president. "Rather than invest in new aircraft, Delta will be spending its capital to improve the quality and consistency of the on-board product and efficiency of the aircraft we already own."
Delta currently offers the most on-demand entertainment among U.S. carriers with more than 100 domestic aircraft equipped with in-seat audio and video on demand. Delta also continues to rapidly expand in-flight Wi-Fi service, which is available on more than 340 aircraft and more than 1,200 flights each day. Delta, the largest operator of Wi-Fi enabled aircraft in the world, plans to have more than 530 aircraft equipped with Wi-Fi by mid-2010.
Delta's upcoming fleet and product investments build on recently announced improvements including the re-launch of the Red Coat program at Delta's international hub at JFK and subsequently at all domestic hubs; the addition of BusinessElite service on Delta's transcontinental routes between New York-JFK and Los Angeles and San Francisco; the introduction of the full flat bed seats on all flights between the United States and London-Heathrow; and the announcement of plans to create a domestic hub at Delta's No. 1 business airport - New York-LaGuardia, subject to government approvals.

Over the weekend, Delta completed its integration of the Northwest reservations system, including the transition of all Northwest flights into the Delta schedule. The final regularly scheduled Northwest flight, NW2470, departed Los Angeles Airport for Las Vegas Saturday at 8:45 p.m. PST, Delta said. Delta and Northwest received approval for a single operating certificate at the end of 2009.

The completion of the transition also means NWA.com was permanently shut down over the weekend; if users type that address on their browsers, they’ll now end up at the delta.com site.

Customers who booked Northwest for travel prior to the switch are now booked on identical Delta flights. Passengers can use the original confirmation numbers provided by Northwest to manage itineraries at delta.com and check in online or at the airport on the day of travel.

Most significantly for Delta, it now can more freely place Delta and former Northwest aircraft anywhere in its system, where they provide the best fit for a market and produce the best profit.

Delta executives said they expect to start doing more of the aircraft route-swapping by late spring or early summer. But they noted that they expect some trial and error in placing aircraft in their best-suited markets, and also have some crew staffing and placement issues to work through before Delta can completely free-flow the fleet


Delta Air Lines reported a first-quarter net loss of $256 million, narrowed from a $794 million deficit in the year-ago period, and CEO Richard Anderson said continuing evidence of "the right trends in the revenue environment" have the company "optimistic about the rest of the year" and anticipating a "solidly profitable" second quarter.

"We continue to see solid advance bookings. . .across all geographic regions," President Ed Bastian told reporters and analysts yesterday. "Clearly the improved strength we're seeing comes from improved corporate travel. We're seeing corporate travel improve across all geographic regions, certainly in New York and across the Atlantic. . .We're not quite at 2008 levels [of business passengers]. We're close to 2007 levels and we expect to be up to 2008" later this year.

"It appears that the economy has pretty good legs under it," Anderson said. But he cautioned that "the issue we have ahead of us" is not generating revenue but keeping costs under control with fuel prices "volatile."

Regarding the merger with Northwest Airlines, Bastian said DL/NWA are "now operating on a single technology platform" and the "heavy lifting of integration is behind us." He claimed DL achieved $200 million in merger synergies in the first quarter and is "now at $1 billion in annual run rate synergies." It did incur $46 million in merger-related expenses in the quarter and expects another $70 million in merger costs for the remainder of the year.

The decision to ground NWA's fleet of 14 747-200 freighters last year (ATWOnline, April 22, 2009) produced $60 million in expense savings in the first quarter, Bastian said. Meanwhile, DL continues to be noncommittal on NWA's order for 18 787s placed in 2005 (ATWOnline, March 5, 2009). When asked if DL is still a 787 customer, Anderson responded, "Technically yes." But he added that he's happy with the airline's current long-haul fleet: "We're in good shape in terms of transoceanic airplanes."

First-quarter revenue rose 2% to $6.85 billion while expenses decreased 5% to $6.78 billion, producing operating income of $68 million, turned around from an operating loss of $483 million last year. Net income was heavily affected by $326 million in interest expenses.


More than 600 angry Delta Air Lines passengers were stranded at JFK Airport yesterday after three of its 767s developed mechanical problems in the space of six hours.
The three flights were scheduled to depart for European destinations. A flight to Barcelona turned back after taking off; the others, to Dublin and Istanbul, never left the ground.
"The delays are incredible, there are no supervisors to talk to and my luggage is held hostage," said Wendy Levy after spending 10 hours at the airport.
A Delta spokeswoman said one plane had engine problems, another a faulty indicator light, and the third delay involved "maintenance."
Asked about three of the same-model jets having problems at the same airport at virtually the same time, she conceded, "These issues do not happen very often."