ATK and Astrium are working together in response to NASA's Commercial Crew Development-2 (CCDev-2) procurement. The team is offering NASA launch services with the Liberty rocket. This new launch vehicle combines two of the world's most reliable propulsion systems, with a collective heritage of nearly 150 successful flights.
ATK would supply the human-rated first stage, which it developed under NASA's Space Exploration Program. The five-segment solid rocket first stage is derived from the Space Shuttle's four-segment solid rocket boosters (SRBs) which are built by ATK and have flown 107 successful missions since 1988 (encompassing 214 SRBs).

Astrium, the developer and manufacturer of the Ariane 5 launcher, working with Snecma (Safran Group), Europe's leading propulsion company, is providing Liberty's second stage based on the liquid-fueled cryogenic core of the Ariane 5 vehicle powered by the Vulcain2 engine.

The Ariane 5 Launcher, operated by Arianespace, has flown more than 40 consecutive successful missions over nearly eight years and has launched more commercial satellites than any other launch vehicle in the world during that time. The Ariane 5 enjoys the lowest launch insurance rates in the industry due to an unrivaled safety record in the commercial launch services market.

"This team represents the true sense of international partnership in that we looked across borders to find the best for our customers," said Blake Larson, President of ATK Aerospace Systems Group.

"Together we combine unique flight-proven systems and commercial experience that allows us to offer the market's most capable launch vehicle along with flexibility to meet a wide variety of emerging needs. Liberty provides greater performance at less cost than any other comparable launch vehicle."

Liberty would be a two stage launcher able to deliver 44,500 pounds to the International Space Station orbit, which would give it a launch capability to carry any crew vehicle in development.

Both stages were designed for human-rating since inception and would enable unmatched crew safety. Since Liberty uses qualified, proven, and reliable systems, the team has planned an initial flight by the end of 2013, a second test flight in 2014, and operational capability in 2015.

"We will provide unmatched payload performance at a fraction of the cost, and we will launch it from the Kennedy Space Center using facilities that have already been built. This approach allows NASA to utilize the investments that have already been made in our nation's ground infrastructure and propulsion systems for the Space Exploration Program."

The advantages of the Liberty launch system are extensive. It is built on a solid foundation of human-rated launch technology, and leverages billions of dollars of investments by NASA and NATO-allied European Governments in the frame of the European Space Agency.

This international effort-which embodies the spirit of global cooperation articulated in the recent National Space Policy-will afford NASA a readily available, cost-effective solution for human spaceflight. Finally, NASA is already extremely familiar with the Ariane and ATK launch systems, both of which have played historic roles in directly supporting NASA's mission.

The five-segment first stage design is based on more than 30 years of safety-driven improvements on the space shuttle program. The result is a higher performing, more reliable solid rocket motor, which equates to increased safety for crew and mission success for cargo.

Besides adding a fifth segment, ATK also enhanced the propellant grain, provided a larger nozzle opening, and upgraded the liner and insulation - all designed to meet performance requirements and increase reliability while significantly lowering manufacturing costs.

ATK has completed the software technical interface meeting (TIM), a gathering with NASA to finalise software development plans. The software must act as a bridge between existing software systems that control the ATK-built solid-fuel lower stage, the Astrium-built Vulcain 2 upper stage and ATK's composite-structure space capsule.

"Understanding how your system will work together throughout the mission is critical in reducing risk and schedule delays," says Kent Rominger, ATK vice president and Liberty programme manager. "Holding this TIM provides us valuable insight into expertise provided by the NASA team and ensures there are no issues we are overlooking."

The Liberty is being developed in conjunction with an unfunded NASA space act agreement (SAA) under the second round of commercial crew development (CCDev) grants. The unfunded SAA means that though NASA gives no money to ATK, they will exchange technical information with the company. ATKs' final CCDev milestone is scheduled for completion in July, though the company submitted a bid for the follow-on commercial crew integrated capability (CCiCap)

Astrium meanwhile has completed a series of tests on the tanks that will hold the cryogenic liquid hydrogen fuel and liquid oxygen oxidizer. The tanks intended for the Liberty are slightly thicker and stiffer than those generally used on the Ariane 5, Europe's main launch vehicle, for which the Vulcain serves as the core stage 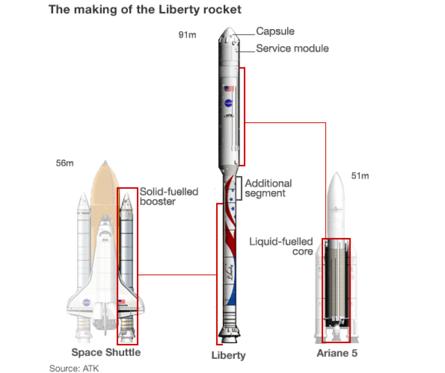 
After failing to win an award in the latest round of NASA's commercial crew vehicle development grants, ATK's Liberty launch vehicle remains on paper facing an uncertain future.

The Liberty, using a five-segment solid rocket booster developed for the Space Shuttle as a first stage and a Vulcain 2 core stage from the Ariane 5 as an upper stage, was designed to launch 20,000kg (44,000lb) into low Earth orbit.

Though the rocket gained an unfunded space act agreement (SAA) during NASA's second round of commercial crew development grants, Liberty was not selected for funding during the third round, the commercial crew integrated capability (CCiCap).

There is, says Kent Rominger, the Liberty programme manager, "no way on internal funding can we finish the Liberty module, interfaces, design. We probably need on the order of $300 million to get the launcher to [critical design review]. And we're not investing that kind of money."

"So we are on an order of magnitude less than that, keeping the programme alive while finding the right investment structure," Rominger adds.

ATK and partner Astrium are examining adapting the launch vehicle for satellite launch, which may require large changes to the design, including the addition of third stage, which would introduce a new level of complexity to the rocket.

"Our two stage configuration is really optimized for LEO (low Earth) orbits. It throws phenomenal payload into LEO," says Rominger. "There's not a huge demand for that, satellite-wise. There is some, NASA as well, but GEO (geosynchronous orbit) is where a lot of the business is. In the GEO world we need to bring on a third stage."

One major issue with turning to the commercial satellite launch market is the need to price competitively. Flying a human-rated vehicle for NASA allows ATK to charge relatively high prices, while the international market for satellite launches is much more competitive.

Flights for NASA would allow ATK to profit from a single launch per year, whereas the launch rate for satellites must be significantly greater. In terms of annual commercial launches, "with four we're healthy. We'd do a lot better at six," says Rominger.