Finnair receives first A330 Eco-efficient A330

Finnair reported a first-quarter loss of €18.6 million ($24.5 million), reversed from a €3.1
million profit in the year-ago period, as "the potential for profitability has run into the sand due to feeble demand and a collapse in price levels," President and CEO Jukka Hienonen said.

Stating that the airline industry's first-quarter results "make for sad reading," Hienonen
said that while Finnair cut capacity, "cost flexibility, particularly in scheduled passenger traffic, is poor." He added that the carrier will benefit this year from an increase in efficiency by retiring the last of its six MD-11s when it takes delivery of its fifth A330-300 by year end. The first
A330-300 arrived in March. It said the A330s will be 20% more fuel efficient than the MD-11s.

The airline claimed that its aircraft financing for 2009 has been "safeguarded" and will
support the A330 deliveries. It additionally said it will have the option of grounding seven 757s by year end when their leases expire.

Looking forward, Hienonen said Finnair will "maintain its Asian strategy" of growing
"services between Europe and Asia, utilizing Helsinki as a. . .transit location." Its capacity for full-year 2009 will be down 8% compared to 2008. The second quarter will "remain clearly loss-making," he conceded, adding that while forecasting full-year results is difficult, he expects a "negative" operating result for 2009. 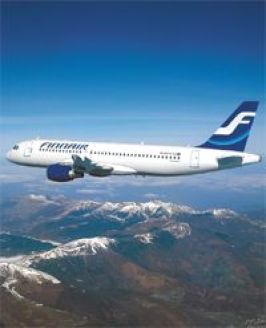 30 Apr 2009 Finnair's second Airbus A330 aircraft will make its first commercial flight to Delhi on Friday, 1 May after which it will start regular scheduled flights on New York and Delhi routes.

Finnair's first A330 aircraft started flights on the New York route in April.
The arrival of the new planes is a part of the extensive long haul fleet renewal. During the current year, Finnair will receive a total of five new Airbus A330 aircraft. The next A330s will arrive in May and June.

The new A330 aircraft will be equipped with the new, lighter Finnair cabin design. These aircraft represent
the latest travel comfort, modern technology and first class fuel efficiency.
jullienaline

* 800 pilots may go on strike on Nov 16
* Union riled by Finnair outsourcing plans
* Shares unchanged
(Adds further details)
HELSINKI, Oct 30 (Reuters) - Pilots at Finnish national carrier Finnair may go on strike on November 16 unless the pilots and their employer come to an agreement, the Finnish Air Line Pilots' Association said on Friday.
Like other airlines, state-controlled Finnair has slashed capacity, cut jobs and launched a number of cost saving programmes as the economic slowdown has reduced demand.
"Our aim is still to find a work agreement," the union chairman, Kristian Rintala, said, adding a strike would concern 800 Finnair pilots.
"But if we do not come to an agreement we will proceed with the strike," he added.
He said the strike would affect Finnair's domestic and international traffic.
The struggling carrier reported a slightly bigger than expected loss in the third-quarter on Thursday, and said sales slumped 22 percent on a year ago as business travel and average ticket prices continued to fall.
Rintala said negotiations -- continuing since November last year when the pilot's latest collective agreement expired -- had come to a head recently as Finnair has started to outsource some routes.
In the event of a strike Finnair will operate as many flights as possible with the help of supervisors or outside workers, it told Finnish news agency STT.

Finnair PLC said Wednesday it has appointed a new president and CEO to replace Jukka Hienonen who announced his resignation in August in "crisis conditions."

Mika Vehvilainen, currently chief operating officer at Nokia Siemens Networks, will take up the position on Feb. 1 after Hienonen leaves his post, the Finnish airline said.
The national carrier has been struggling in the recession with declining demand, competition from budget airlines and over capacity.
On Monday, it warned of more cutbacks this winter after slashing capacity by 12 percent in October. Last month, it reported that third-quarter net loss deepened 15 percent to euro21 million ($31 million) and cautioned that it would take a long time before the company would be competitive. Sales fell 22 percent in the period.
The airline flies to 50 destinations with a fleet of 63 aircraft. Last year, 8.3 million passengers flew Finnair, down 4 percent from 2007.
http://www.forbes.com/feeds/ap/2009/11/11/business-eu-finland-finnair-ceo_7109782.html