The Italian navy has followed other customers for NH Industries' NH90 helicopter by accepting a stepped approach for operating the NFH naval variant.

"We have recently approved the plan to accept a small batch of NFHs in the 'Step A', or meaningful operational capability [MOC] configuration, to speed introduction to service," says Fleet Air Arm Commander Rear Adm Paolo Treu. "The navy is planning to receive the first of four NFHs in the MOC configuration by next autumn, with the remaining deliveries to be completed by 2011."

The 5th Helicopter Group at Luni Naval Air Station near La Spezia will be the first unit to receive the type, which will replace its Agusta/Bell AB212s.

An initial cadre of pilots and maintainers will start training on the NH90 this month, with a consolidated syllabus to be ready by late 2010, says Cdr Paolo Gregoretti, head of the Naval Aviation Test and Evaluation Centre at Luni. NHI partner company AgustaWestland will provide initial training and support under the agreement.

The Italian navy will eventually receive 46 NH90s in the NFH configuration, plus 10 navalised tactical transports. Qualification of their General Electric/Avio T700/T61E1 engines should conclude in 2010, with deliveries of aircraft expected from mid-2011.


The NH90 programme is one of the most successful examples of European co-operation in the rotorcraft sector, with the four-nation NH Industries consortium having so far secured production orders for more than 500 examples.

Fourteen nations have now ordered the NH90 in its tactical transport helicopter (TTH) and NATO frigate helicopter (NFH) variants, and around half of these countries now have examples in service.

Flightglobal in early May visited one of the two European customers with operational NH90s beyond launch nations France, Germany, Italy and the Netherlands.


The Finnish army has been flying the NH90 since May 2008, from its Utti air base. Picture: Tommi Toikander/Utti Jaeger Regiment
Now equipped with seven aircraft from its eventual fleet of 20 TTH-configured NH90s, the Finnish army's Utti Helicopter Battalion has been flying the type since May 2008 from Utti air base near Kouvola. Five of the aircraft were delivered to the customer between March and December that year.

Finland's new aircraft are now being used to support the training needs of its special operations forces, and in particular those of the Utti Jaeger Regiment. They are replacing its Mil Mi-8 transports, the last two of which will be retired within the next few months after an operational history that spans more than 36,000 flight hours with the type since 1973.

The army expects to receive a further five NH90s this year, five more in 2011 and a final three during 2012. All of these will be assembled at the Halli facilities of national aerospace company Patria.

Helsinki's armed forces received their first helicopters in 1961, and have operated the assets from Utti since the following year, logging more than 100,000 flight hours. But a major change happened in 1997, when the air force's rotorcraft were transferred to army control, and the Utti Jaeger Regiment was established.

Previously a poor relation to the air force's fast jet assets, and starved of investment in favour of Boeing F-18C/D fighters, the helicopter force now found itself receiving fresh attention. In 2001, a contract was signed to introduce the new-generation NH90.

"There has been a huge change from 10 years ago," says helicopter battalion commanding officer Lt Col Anssi Vuolle. "There were probably around 40 guys and a few helicopters back then. We now have 150-plus personnel, and within two years we will have 27 aircraft."

These will also include seven MD Helicopters MD500D/Es, which are used to conduct pilot training activities with the battalion's 3rd Company, also from Utti. Finland has amassed more than 35,000 flight hours with the model since 1975, with its current aircraft having been delivered between 1983 and 2001. Modified by Saab, the four newest examples can be used to perform training with night vision goggles.

A new chapter in the service's NH90 operations began in January, when the 10t-class type was declared ready to support the provision of 24h search and rescue services. Aircraft are available to take off within 30min during office hours and in less than 2h at other times. Five rescues had been performed with the aircraft by early May by the battalion's 1 Company, and two lives saved.

"SAR is part of our national defence, and it also gives us public support for a very expensive procurement," Vuolle comments.

Finland's Rolls-Royce Turbomeca RTM322-powered aircraft were handed over first in the initial operational capability configuration, and from August 2009 in the IOC+ standard.

Featuring updated software, engine intake air particle separators and improved diagnostics equipment, the unit's current two IOC+ aircraft are "99% good for anything", Vuolle says. "Not everything is ready, but we are working on it," he adds.

NH90s are now flown with no operating restrictions, and can be operated at up to 175kt (320km/h) - some 40kt faster than the Mi-8 or MD500. However, they are typically operated at lower speeds to reduce fuel consumption. The aircraft's anti-icing equipment has also been shown to work well under Finnish operating conditions.

Finland expects to start receiving full operational capability aircraft from next year, with its entire fleet to have been brought to the standard by late 2013. This update will include adding an EADS Hellas obstacle warning system and Tetra radios to support nation defence duties.

Under current plans, the NH90 fleet will reach full operational readiness in 2013-14. "We're right on schedule," says Vuolle. However, he hopes that the schedule could be accelerated, perhaps to 2012, to provide support for NATO-led forces in Afghanistan.

"There is a shortage of SAR helicopters in [the country's] Regional Command (North)," he notes, with cover now provided by German army Sikorsky CH-53s.

Modifications required before Finland's aircraft could undertake such a commitment would include the addition of door guns - already to occur with the full operational capability enhancement - and ballistic protection. A programme is already in place, Vuolle says.

The helicopter battalion's NH90s have now flown more than 1,400h in 1,300 sorties, with 600h of this total having been added since last August. Highlights have included participating in special forces exercises in Denmark in 2009 and Norway earlier this year alongside Swedish and US personnel. "They were benchmarking exercises for us, and we had good results," Vuolle says.

Pilot training activities are supported by the use of simulators in Germany and two part-task trainers at Utti. "On the helicopter training side, our closest partners at the moment are Germany and the Nordic countries," says Mattsson. Sweden also operates the NH90, while Norway has the type on order.

The unit has around 23 trained pilots and 38 mechanics, but at full strength expects to sustain 30 aircrews.

The battalion's new building at Utti has five hangars to store its new transports, with its MD500s to soon be moved to a refurbished hangar to make room for fresh arrivals. Three NH90s are typically on the flight line at any one time, with others sometimes used to support maintenance training.

"The main problem at the moment is that there are 529 NH90s ordered, and five production lines," says Vuolle. "So it's hard to go in to the production line and get spare parts." The army has encountered shortages in some areas, he says, but notes: "It's getting better all the time, and the delays are getting shorter."

NHI says it had delivered 46 NH90s by earlier this year, with the global fleet having amassed 8,500 flight hours. It has within the last few weeks delivered its first NFH aircraft in a so-called "meaningful operational capability" to the Netherlands (below), and will hand over similar assets to France, Italy and Norway before the end of the year.

Oman is also expected later this year to receive its first of 20 TTH examples, in what will be the first delivery of the type to a Middle Eastern operator. 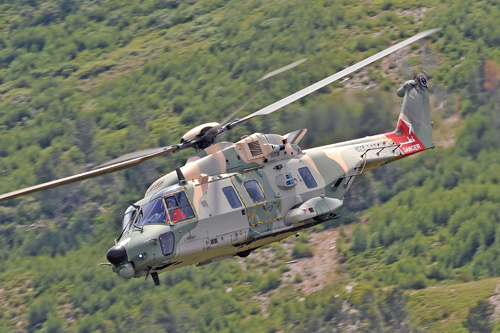 This order follows Leonardo’s dropping of its legal battle with the US Army. Leonardo accused the military of not hosting a full-and-open competition when choosing its ‘institutional training model’. The Airbus UH-27 was chosen but other helicopters, including Leonardo’s AW109, were supposedly considered in the process.
Beochien