10:03 GMT, April 29, 2009 After having obtained its Final Qualification in December 2008 allowing the
Tiger HAP to enter into operational service, the granting of its Initial Operational Capability (IOC) was proposed to the French Army Staff on the 10th April 2009, OCCAR officials confirmed today.

The release of this official proposal has been made possible after:
* A comprehensive review held on 3rd April 2009 at STAT (Section technique de l’Armée de Terre) Premises in
Versailles of the actual operational performances of the weapons system, the logistic support put in place and the doctrine studies carried out,

and, on the other hand, the success of the gun firing by the 5°RHC with the “HAP Std1 Ready to Deploy” on 9th April 2009 in Captieux under the monitoring of Gal Jumelet, the current 4°Airmobile Brigade Commander.

The recognition of this IOC will open the doors for the deployment of a module of 3 Tiger HAP at
any operational theater and this for a long period.

The proposal for the Full Operational Capability (FOC) will be made when the full autonomous support
to the helicopter will be established and is expected by the end of 2010.
Invité

From HAP to HAD: Future Tiger prepared to operate behind enemy’s lines

13:12 GMT, June 5, 2009 The programme of the newest HAD version of the Eurocopter Tiger (company designation EC 665) is well under way, Major Sophie Le Berre, HAD TIGER Manager at French procurement agency DGA told defpro.com. The Tiger HAD (Hélicoptère d'Appui Destruction / Support Destruction Helicopter) has been ordered by the French Army, replacing previously ordered HAPs helicopters, as Le Berre said that the helicopter currently undergoes flight tests which are expected to end by 2010. After evaluation,
qualification and certification during 2011, deliveries may start in mid 2012, according to Le Berre.

Manufactured by Eurocopter in Germany, the Tiger which is called Tigre in France and Spain is a real all-terrain and all-weather helicopter. However, while designed during cold war times several adjustments have been required which lead to new specifications by the French Army in January 2003. With Spain joining the HAD programme in March 2004 and a contract signed between Eurocopter and OCCAR (Organisation Conjointe de Coopération en Matière d'Armement), a European organisation for armament cooperation in November 2005, the programme started and the very first HAD took off for its maiden flight in December 2007.

The HAD version of the TIGER is based on the TIGER HAP: The major difference between the two versions is the integrated air-to-ground missiles (AGM) capability. While France will convert 40 helicopters to the HAD version and equip each of them with eight Lockheed Martin Hellfire II air-to-ground missiles; Spain has chosen Rafael’s fiber-optic guided Spike-ER air-to-ground missiles, which are to be license-built by General
Dynamics Santa Barbara Sistemas for their 18 choppers. Both missiles are famous for their excellent accuracy and their high combat range of 8 kilometres. The Hellfire II missile will be launched in a semi-active laser guided mode through Lockheed Martin’s all-digital M299 "smart" missile launcher.

According to the DGA time-schedule, it is expected that airborne firing tests of the Hellfire will begin as of September 2009, while the Spike missiles has already been regularly tested for use on the HAD since April 2008. The Hellfire II however is already integrated and qualified with the Australian Armed Reconnaissance
Helicopter (ARH) Tiger, thus should proceed as expected.

The self-protection system, which is the same of the HAP, has laser and radar warning receivers as well as a missile launch detector. The entire systems information will be connected on a display in the cockpit and with the automatic chaff and flares dispenser. Fitted with this system and additional ballistic protection as well as armed with a Nexter 30mm cannon turret, the HAD is fully prepared to operate in hostile territory, Le Berre said.
With 6.6 tones, the Tiger HAD version will have a slightly higher take-off weight comparing to its predecessor, the HAP. To maintain the helicopters performance while dealing with higher weight, a new more powerful engine will be integrated in the aircraft. The MTR390-E (enhanced) engine built by MTRI – a joint venture
including Rolls-Royce, Turbomeca, MTU and ITP – will have a power increased by 14 per cent compared to the existing basic version, thus achieving nearly 1,500 hp. The engine recently performed ground tests and are intended to be implemented in the Tiger PS-0 Prototype very soon. According to a company spokesman, a first flight with the new engine on the HAD will be accomplished by summer 2009.

Further improvements of the HAD include an IFF interrogation function and as well as a laser designator incorporated in the Strix observation and sighting systems built by Sagem Défense Sécurité, part of
the French SAFRAN Group.
With high-performance optronic sensors, the STRIX gyro-stabilised system will provide the Tiger HAD with observation, identification and engagement capacities at long ranges both day and night, the company spokesman said. Through its dual-mode laser designator the new anti-tank weapons could be laser-guided and targets can be tracked simultaneously.
The Spanish HAD helicopters will be assembled in Eurocopter’s Spanish Albacete site, while the French will be assembled in the group’s main plant in Marignane.

“The HAD is the future Tigre, ” Le Berre said.
alain57

The Royal Australian Air Force has conducted a trial loading of an Australian Army Eurocopter Tiger armed reconnaissance helicopter aboard one of its Boeing C-17 strategic transports.

Performed at Amberley air base in Queensland earlier this month, the trial saw one aircraft winched aboard a C-17 and secured, requiring the removal of three of the Tiger's main
rotor blades and the barrel for its 30mm cannon.

The air force's Air Movements Training and Development Unit from Richmond air base in New South Wales was involved in the activity, which would support any future decision to deploy the Tiger on an international operation. 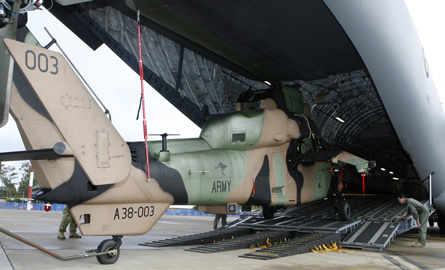 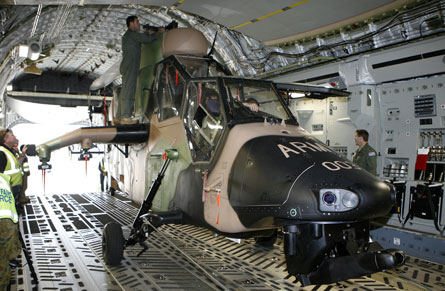 Paris - France has asked EADS Eurocopter to propose a full remedy to a problem with electric cable harnesses on the Tiger attack helicopter operated by the French Army, Defense Ministry spokesman Laurent Teisseire told journalists May 27.

News of the French problems emerged after Reuters reported May 25 that the German Defense Ministry was suspending deliveries of its 3 billion euro ($3.68 billion) purchase of 80 Tigers because of wiring problems.

EADS Eurocopter said wire damage was found in March 2009 in two areas of the HAP/UHT versions of the Tiger in service with France and German forces. Eurocopter said the cable installation needs to be fixed firmly to the aircraft walls to avoid movement and friction on the cables.
The French have fixed the damage when they've found it, but the French authorities have asked the manufacturer to propose a systematic solution by month's end, Teisseire said.
The problems have not affected the operational efficiency of the Tiger, three of which have been flying in Afghanistan with the French Army since last summer, he said. The French Army Tigers flying in the Afghan theater employ the protective measures, the company said.
Eurocopter is ready to propose a solution by the end of the month, a company spokeswoman said. No financial details were available and the cost would be met by the contractor, she said.
"Corrective measures" related to the wiring problems have been developed, agreed with the customer and are being implemented, Eurocopter said.
France has received 23 of the HAP (hélicoptère d'appui protection) version, eight of which are in the final standard 1 configuration.
Germany has taken delivery of 11 of the UHT variant, notable for its mast-mounted sight above the main rotor. Germany has not yet deployed its Tigers to Afghanistan, despite increasing intensity of combat on the ground.
"Tiger helicopters have flown more than 20,000 flight hours, without any flight incident from harnesses chafing," Eurocopter said.
Separately, the Australian authorities have suspended, as a precautionary measure, flights of the MRH90, following failure on April 20 in one of the two Rolls-Royce Turbomeca (RRTM) engines on an aircraft flying in South Australia. The aircraft flew back to base on the one engine.
The MRH90 is the Australian version of the Eurocopter NH90.
The NH90, currently being delivered to the French Navy as the NFH variant, uses the same RRTM engine, the company spokeswoman said.
The global NH90 fleet has not been suspended from flying, the company said. All NH90 operators have been advised by RRTM to perform additional checks on the engine.


Australia has joined France, Germany and Spain in planning a mid-life upgrade (MLU) for the Tiger ARH (attack and reconnaissance helicopter) made by Airbus Helicopters. The MLU could save the Tiger helicopter in Australia, where the defense department has not been happy with its serviceability and support.

It has said that the army’s 22 Tigers could be replaced if their performance does not meet requirements by the time of its Combat Assurance Program in 2019. The MLU is planned to be available from that year, with the modified helicopters designated the Tiger Mk3.