US cargo plane goes down in Dubai

DUBAI // A United Parcel Services (UPS) cargo plane crashed in an unpopulated area near Dubai airport at 8pm, igniting in a huge fireball.

The plane crashed inside the Nad al Sheba military camp, near Academic City and Global Village, according to a military source at the scene. Emergency vehicles were seen entering the camp.

Joseph John, an academic, was driving with a friend down the highway when he saw the explosion. "It was pitch black and I saw an orange glow and then I saw the biggest fireball I have ever seen," he said.

"It was like a five to six storey building and then a big black mushroom cloud."

Dubai police confirmed the crash. It is not yet confirmed about any casualties but state news agency WAM said the plane went down in an unpopulated area.

The US company also has confirmed the crash on its website, saying that the plane is a 747-400F model with two crew members aboard, headed from Dubai to Cologne, Germany. It crashed on takeoff; the company did not confirm any casualties.

"Safety is a key priority for UPS," said Airline & International Operations Manager Bob Lekites. "This incident is very unfortunate and we will do everything we can to find the cause.

"Our thoughts go out to the crew members involved in the incident and their families."

UPS is the world's largest package delivery company, according to its website, headquartered in Atlanta with operations in more than 200 countries.

This has been a bad year for the aviation industry with rough estimates saying that 847 people have died so far this year alone in 35 crashes around the world.

There is now a report from a pilot, on PPRUNE:

"I witnessed the whole thing on the radio while landing into AUH.
After
attempting a straight in approach for 12L and getting there high and
fast they were suggested to try OMSJ on hdg 090 or make a 360°.
I am afraid they lost spacial orientation while trying to join a RH downwidn for 12L.
They
seemed to be unable to see any flight instrument or radio in the
cockpit and they continously asked for their altitude, speed, heading to
ATC."

The aircraft had apparently taken off and while heading towards Qatar, problem arose; OMSJ is Sharjah.

By ANDY PASZTOR and MELANIE TROTTMAN

Federal officials are poised to substantially tighten restrictions on transporting lithium batteries in U.S. cargo planes, according to people familiar with the details, after an apparent cargo fire resulted in the crash of a United Parcel Service Inc. jet in Dubai. The move, which would affect nearly all U.S. cargo carriers, could also force manufacturers and distributors of consumer electronics to alter their packaging and documentation procedures. Lithium batteries are used in a wide array of electronic devices, such as cell phones and laptop computers. View Full Image 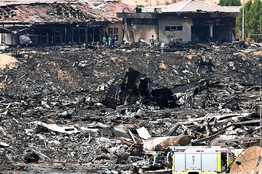 The urgency of the new restrictions, which people familiar with the matter expect to be announced shortly, appear to be a response to signs that lithium batteries may have stoked the intense fire and dense smoke that filled the cockpit of the UPS Boeing 747 jumbo jet before it went down on Sept. 3, while trying to return to Dubai International Airport. Both pilots died in the accident, which has revived debate over the fire hazards of lithium batteries. They can burn intensely, and once on fire can be particularly difficult to extinguish.By requiring special packaging and other safeguards for lithium batteries and products containing them, the new restrictions would resolve long-running disputes between some airline-industry officials and pilot groups over the dangers posed by such cargo. It will likely be increasingly difficult to ship large volumes of batteries, by themselves, on a single plane, according to the people familiar with the details. Investigators haven't yet revealed details of the Boeing 747's cargo or the official cause of the crash. But people familiar with the details said the flight, which originated in Hong Kong and then stopped in Dubai on the way to Cologne, Germany, had large amounts of consumer electronics aboard. The extent of the fire may make it impossible for investigators to conclusively determine where and how it broke out. A Department of Transportation spokeswoman declined to comment, as did a Federal Aviation Administration spokeswoman. UPS officials have declined to comment on the status of the investigation.But industry safety experts said they expected government action in the next few days. Transportation-department and FAA officials, they said, were discussing safety initiatives to require special protective packaging on lithium batteries, to limit the number allowed on one plane and to mandate warnings to pilots about the type of cargo loaded before takeoff. Earlier this year, transportation officials proposed restrictions on such batteries in cargo carriers, essentially classifying them as hazardous or dangerous goods, requiring packaging to prevent short circuits and limiting where they may be loaded inside cargo planes. But those proposals were not made final.In October, 2009, the transportation department issued a lithium-battery safety advisory aimed at shippers and carriers responsible for complying with hazardous-materials regulations for passenger and cargo aircraft. The agency said it was especially concerned about undeclared shipments of lithium batteries, and tallied more than 40 air-transport-related incidents involving such batteries and electronic devices since 1991.Passenger planes over the years have complied with strict restrictions, and often outright bans, on lithium batteries carried as cargo. Since January, 2008, transportation-agency rules have barred airline passengers from packing spare lithium batteries in checked baggage. But if passengers put a portable electronic device in their checked baggage, the batteries are allowed to remain. In carry-on baggage, passengers can still pack a number of batteries of different types, including those commonly used in cell phones and most laptop computers.The UPS jet's flight-data recorders have been downloaded by U.S. crash investigators, and early analysis is consistent with the theory that the blaze started in a cargo area, spread quickly and then pushed smoke into the cockpit, preventing pilots from seeing their instruments. On Tuesday, investigators from the United Arab Emirates gave the strongest public signal yet that the blaze originated in the cargo hold. They disclosed that prior to smoke in the cockpit, there was a fire warning received by the crew. Such warnings normally come from sensors in or around the cargo compartments, not inside the cockpitThe U.S. National Transportation Safety Board, which is participating in the investigation, years ago urged regulators to require installation of fire-suppression systems in the main holds of cargo planes. The recommendations came after a 2006 fire damaged a UPS McDonnell Douglas DC-8 cargo jet that managed to land safely in Philadelphia, with the crew barely escaping the flames. At the time, the safety board also called for enhanced training, improved pilot exits and upgraded smoke detection systems. More recently, board officials stepped up ther campaign to champion such improvements. They have declined to comment on the current crash, as have UPS. officials.Many lithium batteries have internal safeguards designed to prevent fires in case batteries overheat or malfunction. Investigators looking into the Dubai crash are trying to determine if the batteries aboard the plane had such systems, and whether they were working properly.The debate over preventing fires stemming from lithium batteries is complicated by the fact that FAA critics contend parts of the agency's proposal from earlier this year aren't consistent with international safety standards covering battery shipments. Write to Andy Pasztor at andy.pasztor@wsj.com and Melanie Trottman at melanie.trottman@wsj.com

* Regulators concerned with lithium battery fire risk
* Ill-fated UPS cargo jet was carrying lithium batteries
* Lithium battery cargo banned from passenger planes
WASHINGTON, Oct 8 (Reuters) - U.S. aviation regulators want cargo airlines to take new precautions while shipping lithium batteries, which are commonly used in laptop computers and other electronics, due to fire risk.
An interim Federal Aviation Administration safety alert was issued on Friday, a month after the crash of a UPS Inc jet in United Arab Emirates, which killed two pilots.
The cause of the Boeing 747 crash has not been determined. But the FAA said it was aware that Flight 006 was carrying "large quantities of lithium batteries" and believes it is "prudent to advise operators of that fact."
Lithium-ion and lithium metal batteries can be flammable and capable of ignition when short-circuited, overcharged, heated to extreme temperatures or mishandled, according to an FAA battery flammability study.
Bulk shipment of lithium metal batteries is prohibited on passenger airliners.
The Transportation Department has proposed a rule to reduce the risk of fire from lithium batteries. The rule is under review by the White House budget office.
In the interim, the FAA recommended on Friday that shipping customers clearly mark bulk packages of lithium batteries to be flown on cargo planes.
The FAA also wants carriers to more carefully handle such cargo and ensure that it is stored in areas with adequate fire suppression options.
The recommendations do not apply to batteries used in the cockpit or carried aboard by crew or passengers. (Reporting by John Crawley; editing by John Wallace)


Investigators have determined that the fire which brought down a UPS Boeing 747-400 freighter near Dubai probably started in the main cargo deck just forward of the wings.
The United Arab Emirates' General Civil Aviation Authority states that there were no declared shipments of hazardous material on the 747, but that package details identified "many" shipments of lithium batteries.
Further investigation found that at least three consignments contained lithium ion battery packs which met hazardous materials criteria and "should have appeared on the cargo manifest", the GCAA adds.
The crew of the aircraft, en route to UPS's Cologne hub on 3 September last year, advised Bahrain air traffic control of a fire warning 22min after leaving Dubai. The 747 was cruising at 32,000ft at the time and turned right to return to Dubai - a distance of some 150nm.
In an interim factual report on the accident the GCAA identifies the approximate location of the fire, in the forward main deck, below areas of ducting for the elevator and rudder controls.
Having been cleared to descend to 27,000ft the crew requested an immediate descent to 10,000ft.
"It is likely that less than 5min after the fire indication on the main deck, smoke had entered the flight deck and intermittently degraded the visibility to the extent that the flight instruments could not effectively be monitored by the crew," says the GCAA.
It adds that that flight-data recorder information shows a "movement anomaly" with the elevator, which was not responding properly to control column input.
Seven minutes after the initial alarm, during the emergency descent, the captain transferred control of the 747 to the first officer after declaring a lack of oxygen supply. Portable oxygen is stored behind the pilots' positions and the cockpit-voice recorder indicates that the captain left his seat. There was no further evidence on the recorder of further interaction from the captain for the remaining 22min of the flight.
The jet was inbound to Dubai International Airport runway 12L but overflew the airport's northern boundary at 4,500ft and 340kt.
While the flight crew were advised of the availability of Sharjah Airport, which required a left turn, heading 095 degrees. The GCAA says the co-pilot acknowledged the heading change and entered 195 degrees on the mode control panel.
It adds that the autopilot disconnected, the jet reduced speed and entered a descending right turn at 4,000ft. Several bank-angle, sink rate and ground-proximity warnings sounded before the 747 eventually crashed on a military installation 9nm south of Dubai, killing both pilots