RoboSeed: Mining the simplicity of the samara

University of Maryland aerospace engineering doctoral candidate, Evan Ulrich, has developed a new micro air vehicle that, like the bumble bee, should technically not be able to be flown and controlled, yet here it is. Ulrich has started a new company, RoboSeed, to market the fruits of his masters and doctoral labour. Here's a video of Ulrich talking about and flying the latest version of the RoboSeed at the University of Maryland Robotics Center open house on 10 September 2010. Here are more details on the program for a story I wrote for the 21 September issue of Flight International:RoboSeed perfects single-wing rotorcraft
John Croft / College Park, MDA biologically inspired graduate school project taken on by a University of Maryland student could become a money-making commercial venture for the doctoral aerospace engineering candidate later this year.Evan Ulrich's thesis topic - controlling the flight of a maple seed, or samara - has led to an unusual but surprisingly viable unmanned air vehicle that he is not only using as a dissertation topic but as the launch platform for his new company, RoboSeed. Since beginning the project in 2005, Ulrich has built more than 100 versions of the patented device, which he says is the world's smallest single-wing rotorcraft. Wing spans have ranged from that of a maple seed, about 3.5cm (1.4in), to 50cm. The most recent version, whichUlrich is marketing to military and government agencies, features carbon fibre construction and an 18cm wingspan. With a 480mAH lithium polymer (LiPo) battery, the $500 device weighs 72g, can fly for 15 minutes at an altitude of 150ft (45m) under the control of an operator with a two-channel radio control unit. Alternate designs have flown for as long as 30 minutes at up to 400m altitude, says Ulrich.During the research phase of the project, Ulrich studied the effect that changes in wing geometry have on the different flight dynamics of a samara through drop testing in the laboratory. "We found that the seed will travel in one of two flight paths - either straight down or a helical flight path, the difference between the two being the wing angle," says Ulrich. It turns out that a high wing angle with respect to the ground plane, causes the samara to go in a straight line down while a low angle causes it to fly in a circle, the size of which depends on the angle. This led to a control scheme which uses an electric motor and propeller to provide the rotational energy that gravity offers in nature, and a wing pitch mechanism to control the radius of the circular path. After the motor is running, the operator controls the flight path through the pitch control only, with higher wing angles resulting in a tighter circle. If power fails, the device autorotates to the ground, seed-like, and the tough construction prevents damage to any components. Tradeoffs between weight and payload will be key going forward. Ulrich says about 30% of the RoboSeed's weight, or about 20g, comes as a result of protective features of the design, which have made it a rugged test platform.
----------
JPRS
Beochien

Taxiing under jet power is not the most efficient, or environmental, way to get around and electrically powered nose wheels are under development to reduce fuel consumption and emissions during ground operations. Now the German Aerospace Center (DLR) is taking the next step - powering the nose wheels from a clean and quiet fuel cell.

DLR says the fuel-cell system is capable of powering the nose wheels of an aircraft weighing up to 70 tons (the maximum ramp weight of an A320 is 74-78 tons). Fuel-cell power will reduce emissions by up to 27% and noise by up to 100% compared with ground operations under jet engine power, saving 200-400 liters of fuel a day based on seven take offs and landings a day, DLR calculates.


Tests of the electric nose wheels are the third phase of DLR's ELBASYS (electric baseline systems) research project, which aims to demonstrate a zero-emissions replacement for the conventional gas-turbine auxiliary power unit (APU) and emergency power sources such as the ram-air turbine.

In the first phase of the project, working with Airbus and Michelin, DLR integrated a 20kW fuel-cell system into the ATRA to provide emergency power to the electric motor pump on the back-up hydraulic system and ailerons. Flight tests were conducted in 2007-8.

In the second phase, the fuel cell also produced water for the toilets and air-conditioning system and low-oxygen air to inert the fuel tanks. This multi-function capability is aimed at offsetting the weight penalty of the fuel-cell power system compared with an APU.


...
an airline could save approximately a total of seven minutes per aircraft per gate push-back...
...

Essentially the savings could provide an airline with a lot of extra time every day and that time is worth a staggering amount of money.  For American Airlines and Southwest Airlines, the number is around a billion dollars per year.  Even British Airways, with the smallest potential savings of $166m, should find this item riveting.  Every airline, especially network airlines, are desperate to find operational savings.  Here we see an example staring them in the face.

One can argue the number of minutes and the dollars per minute.  Change them, and even then, the potential dollars saved is a large number.

...
Airlines that deploy e-taxi could see big time savings that could mean getting another flight out each aircraft every other day or simply serious financial benefits – taking 30 minutes as a guide, this is worth $3,000 per day per plane.   Improved operational efficiencies are significant.

Seven European countries announced on Thursday (23 March) a joint initiative to acquire and deploy world-class high-performance computers, a project the European Commission says is comparable to the size of Airbus or the Galileo satellite navigation project.
The plan to establish an integrated world-class high-performance computing infrastructure was launched in Rome on Thursday (23 March) by ministers from France, Germany, Italy, Luxembourg, the Netherlands, Portugal and Spain.
The EuroHPC declaration was officially signed in the Italian capital, two days before EU leaders meet to celebrate the 60th anniversary of the Treaty of Rome. More countries are welcome to join the project “at any time”, the declaration says.
The project aims to deploy so-called exascale computers that are capable of at least 10 to the 18th power calculations (or a billion billion calculations) per second, the Commission said in a statement.
“High-performance computing is moving towards its next frontier – more than 100 times faster than the fastest machines currently available in Europe,”
Beochien


MIT engineers are proposing a new way to reduce a plane's lightning risk, with an onboard system that would protect a plane by electrically charging it. The proposal may seem counterintuitive, but the team found that if a plane were charged to just the right level, its likelihood of being struck by lighting would be significantly reduced. 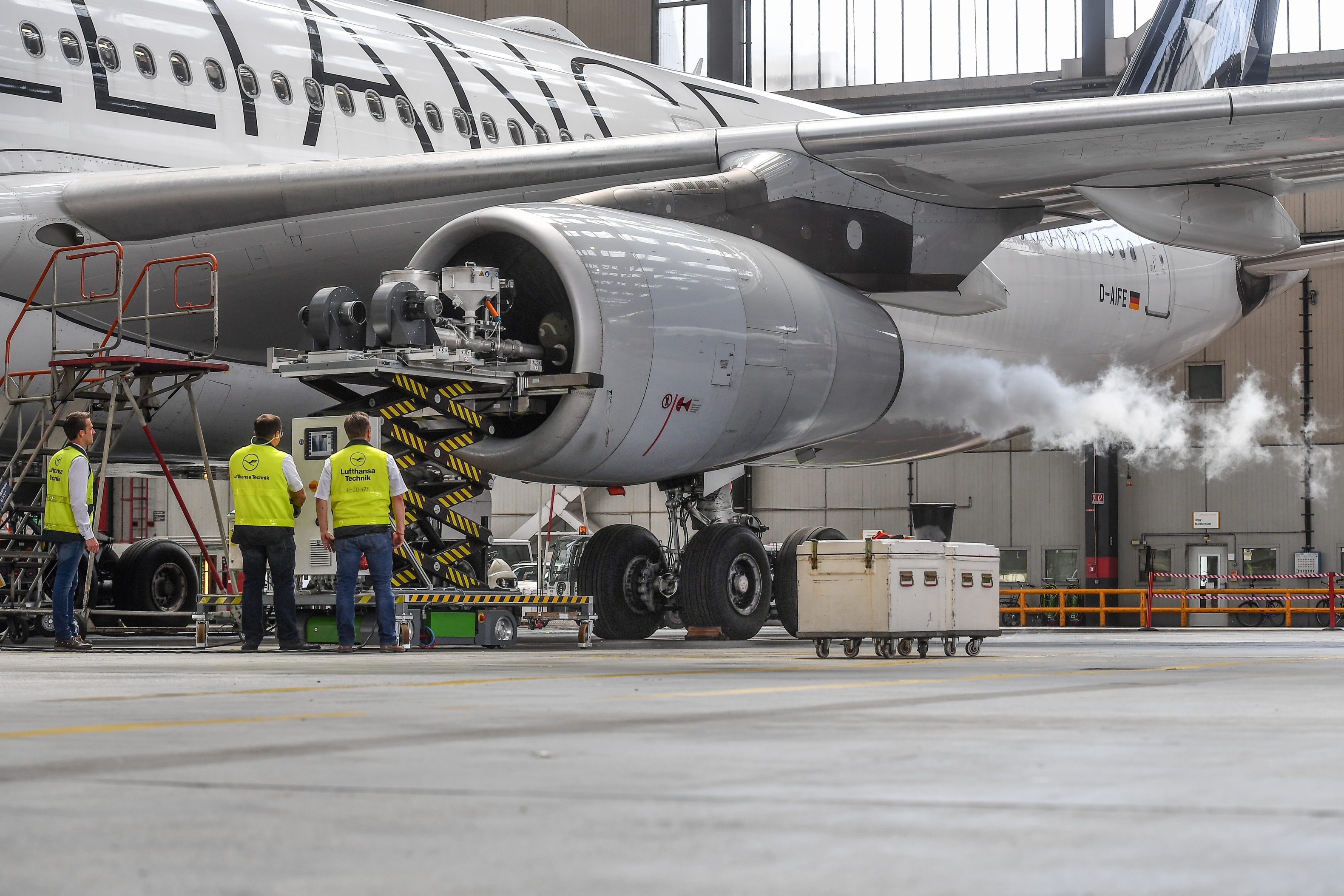 
During the cleaning process, dry ice pellets are fed into the engine through the intake. Upon impact, kinetic energy is released and some of the dirt is dislodged from the components. The dry ice pellets immediately transform from a solid to a gaseous state without melting in between. Upon contact with the ice-cold pellets (-78.5 degrees Celsius / −109.3°F), the dirt contracts, becomes brittle and is thoroughly but carefully removed. Since dry ice blasting does not leave any residue, no run-up is necessary after the engines have been washed


What’s interesting is, if you look at the rear T-38, you see these shocks kind of interact in a curve,” he said. “This is because the trailing T-38 is flying in the wake of the leading aircraft, so the shocks are going to be shaped differently. This data is really going to help us advance our understanding of how these shocks interact.” 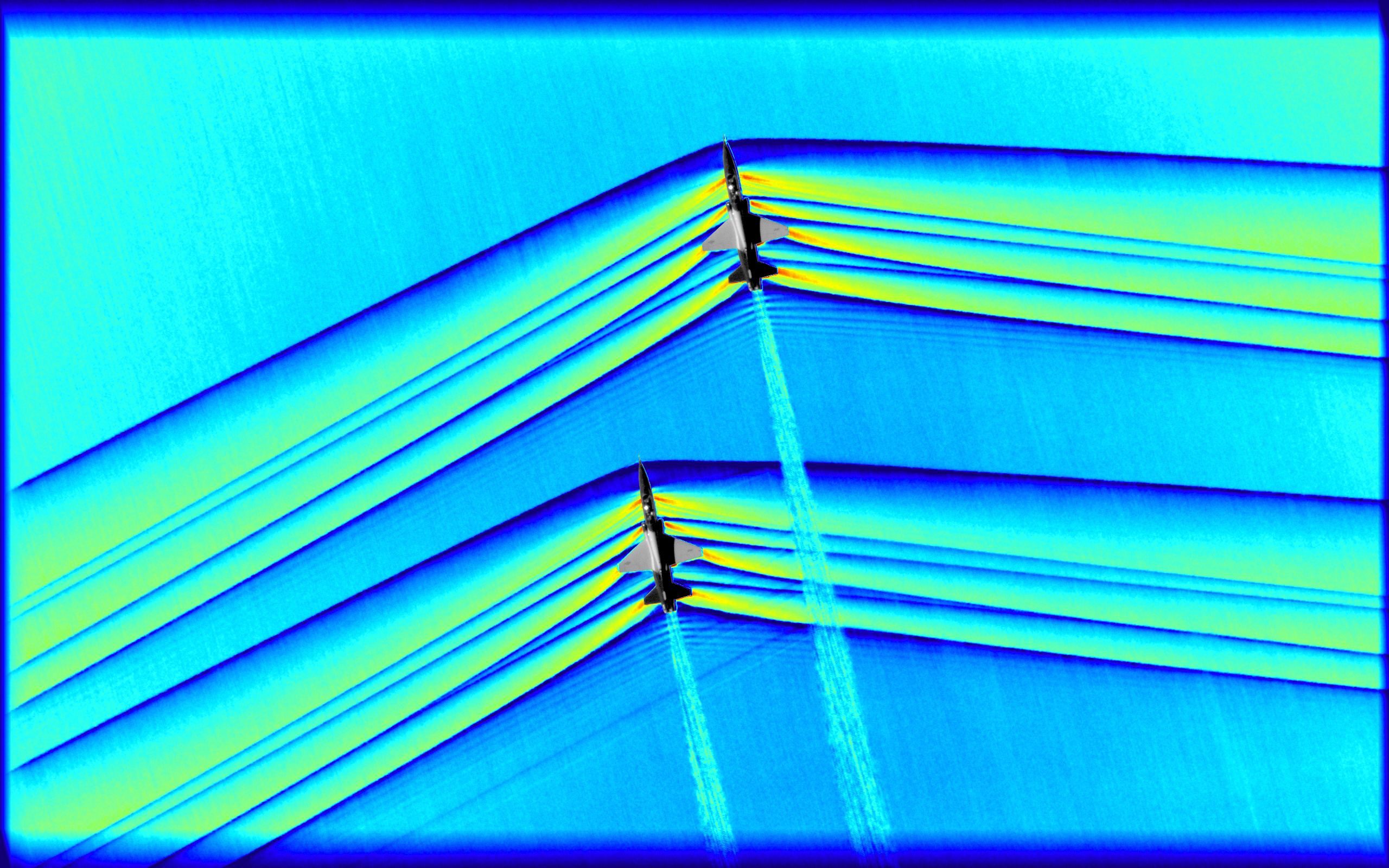