For the fiscal year 2008, Thai Airways International Public Company Limited continues to encounter crises
such as the continuing sharp rise of jet fuel price, the global economic slow down, as well as the political unrest in the country.
As a result, the Company’s total operating revenue amounted to THB 200,118 million, which was an increase
of 1.6% from the same period last year. However, the operating expense totaled THB 206,780 million, which was an increase of 10.8% over the same period last year.
The reasons were the increase in fuel and oil expense in-line with a 47% rise in average jet fuel price, the increase in depreciation from the change in the estimated useful life of new aircraft and engine types and also cost for the Mutual Separation Plan in order to reduce personnel expense in the long run.

In addition, the weak Thai baht at the end of the period caused the Company’s foreign currency exchange loss in the amount of THB 4,471 million, which was mostly due to converting of the Company’s outstanding foreign currency loans into baht terms.
Furthermore, the Company reserved contingent liability for damages arising from potential violation of Antitrust or Competition Law in the amount of THB 4,290 million.
Also, the Company recorded an impairment loss on pending sale of aircraft, amounting to THB 4,426 million.
Consequently, the Company’s net loss was THB 21,379 million or THB 12.58 per share, which was in contrast to the net profit of THB 4,368 million or THB 2.57 per share last year. EBITDA was THB 13,619 million.

Not including the loss on foreign currency exchange as well as the reserve of the estimated damages for
Antitrust or Competition Lawsuit and also the impairment loss of aircraft, the Company’s loss before tax was THB 10,413 million.

Mr. Pruet Boobphakam, THAI Executive Vice President Commercial and Acting
Managing Director of Cargo & Mail Commercial Department, said that under the
Aircraft Block Space Agreement, THAI acquired all of the capacity on SAI's
brand new B777-200LR Freighter aircraft. The agreement makes THAI the first
operator in the region to offer this capability to its cargo customers.

The B777-200LR Freighter is the most advanced freighter aircraft ever built in
term of fuel efficiency and low carbon footprint and has more than 100 metric
tons of cargo capacity. The two aircraft will arrive in early 2010 and are
expected to be used initially for the route from Bangkok to Europe and
eventually for additional routes such as Australia and the US.

At the signing ceremony, Mr. Brian R. Neff, President of SAI, said, "There is
growing recognition in the cargo industry that the B777LRF will be the
long-haul aircraft for the coming decade and beyond, and our new partnership
with THAI Cargo only confirms this recognition. We welcome THAI Cargo into
our blue-chip customer base and look forward to a successful cooperation."

Southern Air Inc. was founded in 1999 as a low-cost, high-quality cargo
carrier specializing in the provision of block space and aircraft, crew,
maintenance, and insurance ("ACMI") services through its fleet of 17 B747
freighter aircraft. It is the first ACMI operator in the world to operate the
next generation of freighter aircraft, which includes the B777-200LRF and the
B747-8F.


Thai approves lease of 15 widebodies
Tuesday February 9, 2010 The Thai Airways board announced plans to lease 15 widebody aircraft over the next five years, requiring an investment of approximately THB35 billion ($1.05 billion).

Thai currently has five A330-300s and six A380s on order. Chairman Amphon Kittiamphon told the Thai News Agency that it expects to begin taking delivery of the A330s this year and the A380s in 2012 or 2013. The 15 new aircraft will comprise seven seating some 300 passengers and eight seating at least 350, which will be operated on leases of 10-15 years. The airline currently operates 91 aircraft and expects to have 102 within 15 years, he said. The board also approved THB3.92 billion for spare parts.

President Piyasvasti Amranand told The Nation that TG intends to reduce nonfuel expenses in 2010 by THB12 billion. He said last month that it expects to report profits for both 2009 and 2010 (ATWOnline, Jan. 15).

Thai Airways International has clinched a deal to lease eight brand-new large-capacity long-haul Boeing jets from BOC Aviation as part of its ongoing fleet renewal.The leasing unit of Bank of China was chosen over two other contenders, Dubai Aerospace Enterprise (DAE) and Dublin-based AWAS, which were unable to make available the required eight B777-300ER planes.
DAE could only spare four while AWAS has two for leasing to THAI, according to THAI insiders.
Under the deal sealed recently, BOC will lease the aircraft for 12 years at US$1.15 million a month per jet, plus a "commitment fee" of $5.87 million per aircraft, a charge that will not be returned to the airline.
BOC, wholly owned by Bank of China, one of the 10 largest banks in the world, will deliver the first plane to THAI in August 2012 with the last due in October 2013.
The eight B777-300ERs will be used on European routes, replacing ageing B747-400s and the B777-300ERs that THAI has leased from India's Jet Airways and will give up the fleet upon the expiry of the three-year lease by then.
The new aircraft provided by BOC will be configured with two classes, 40 seats in business class and 306 in economy class.
The business class will have flat-bed seats while the economy seats will be equipped with personal screens featuring inflight audio-video on-demand systems.
All these features are not currently available in most THAI's aircraft, except the three B777-300ERs leased from Jet Airways.
The eight B777-300ERs leased from BOC form parts of the 15 mid-size wide-body aircraft acquisition approved earlier this year by the THAI board to conform with the aircraft replacement programme for medium to short-haul routes.
The seven other aircraft, Airbus A330- 300s, have earlier been ordered by THAI and are due to join the fleet in stages, starting from mid-November 2011 to April 2013


* Airline wants compensation for late delivery of seats
* Delay caused by Koito falsifying seat safety test results
* Koito parent stock plummets 16 percent
By Arada Kultawanich and Antoni Slodkowski
BANGKOK/TOKYO, Oct 8 (Reuters) - Thai Airways International Pcl is expected to seek up to $200 million compensation from Japan's Koito Industries for the delayed delivery of seats, an executive said on Friday.
The seat maker didn't supply the chairs on time as it failed to obtain certification for its products from Japanese and European authorities after admitting earlier this year it had falsified safety test results.
A Thai newspaper earlier quoted an airline source as saying the flag carrier would sue Koito for $500 million. Shares of its parent company, Koito Manufacturing, dropped 16 percent to a 16 month low.
"The compensation will be worth up to $200 million, not $500 million," Raj Tanta-Nanta, a vice-president for investor relations at the state-controlled carrier told Reuters, although he declined to give the exact amount.
"We are checking many things about this issue, but we still haven't received any claim or information on a lawsuit from Thai Airways," said Koito Manufacturing spokesman Shinji Karasawa.
U.S. and European aviation regulators ordered airlines last month for worldwide checks of seats made by Koito Industries, a move estimated to affect 150,000 seats on 1,000 passenger jets.
Koito Industries paid 3.6 billion yen ($44 million) in compensation for delays in delivery to different airlines last financial year and set aside 3.3 billion yen for further expected claims this year.
In June, Thai Airways selected Germany's Zim Flugsitz GmbH to replace Koito as a supplier.
Koito Industries, 50 percent-owned by Koito Manufacturing, dropped 3.3 percent to 145 yen.
Stock of Koito Manufacturing, in which Toyota Motor Corp has a 20 percent stake, fell 16 percent to 1,047 yen, while the broader market edged down 0.5 percent.


Thai Airways International is going ahead with plans to establish a new, full-service, short-haul carrier and hopes it will start operating early next year. The plan was approved by the airline’s board on Friday.

This new airline, which will be based in Bangkok and will operate under a new sub-brand, will be a business unit of Thai Airways and will operate domestically and on short-haul international routes using 11 aircraft, it says. The aim is for it to differentiate itself in the marketplace with a new image and price differentiation, says Thai.

Chotichanapibal said starting a new full-service airline means the operation will no longer be saddled with the relatively high cost structure inherent in the mainline business.

Thai Airways Chairman Ampon Kittiampon told journalists in Bangkok Friday that the new carrier, tentatively named Thai Wings, would start flying in March or April and will operate 737s. But he stopped short of saying if these will be 737-400s or -800s.

In a separate development, Thai Airways announced last year that it would launch a new Bangkok-based low-cost carrier, Thai-Tiger, in joint-venture partnership with Singapore’s Tiger Airways. It said the new low-cost carrier would start flying in May, but Kittiampon told journalists that the launch has been delayed by two to three months. Thai-Tiger is still waiting for approval from Thailand’s transport minister, Sophon Zarum, who said last year he opposes the tie-up.


Thai Air A380s
Thai Air’s A380s will accommodate 507 passengers, including 12 in first, 60 in business and 435 in economy. The first-class seats will be 26.5 inches wide and offer an 83-inch pitch, a measure of legroom, according to the carrier’s website. The first superjumbo will arrive by early October and six will be in service by the end of next year. Routes could include Hong Kong, Frankfurt, London, Tokyo, Paris and Copenhagen, outgoing- President Piyasvasti Amranand said last month.


Thai Airways International has taken delivery of its first Airbus A380, becoming the ninth airline to operate the type.

The aircraft was handed over to Captain Montree Jumrieng, executive vice-president technical, Thai, at a special ceremony in Toulouse on 27 September.

Thai has a total of six Rolls-Royce Trent 900-powered engines on order, configured in a three-class layout to seat 507 passengers.

The carrier will inaugurate commercial service with the A380 in early October on the Bangkok-Hong Kong and Bangkok-Singapore routes. As more aircraft are delivered, it will begin service to Frankfurt at the end of the year, followed by Tokyo and Paris early in 2013 and Osaka and Syndey in late summer.

"Financially we don't need the planes and commercially we have not sold enough tickets. The more capacity we have the more trouble we will run into, so the more we can delay the better," he said.

In January, Charumporn alluded to negotiations with the two manufacturers over revised 2018 delivery dates for the aircraft deemed surplus to requirements.

Thai is scheduled to take delivery of its first two A350-900s later this year with the type set to make its commercial debut on July 1 with a daily Bangkok Suvarnabhumi-Melbourne Tullamarine return service. Thereafter, five A350s will arrive in 2017 followed by a further five in 2018.
Poncho (Admin) 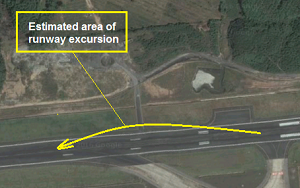 Well I wonder how it's possible to mess up that badly in an A350 despite all the technological aid available to the pilots. With ROPS, windshear detection, autobrake, auto thrust, flight laws, flight directors, HUD, etc. 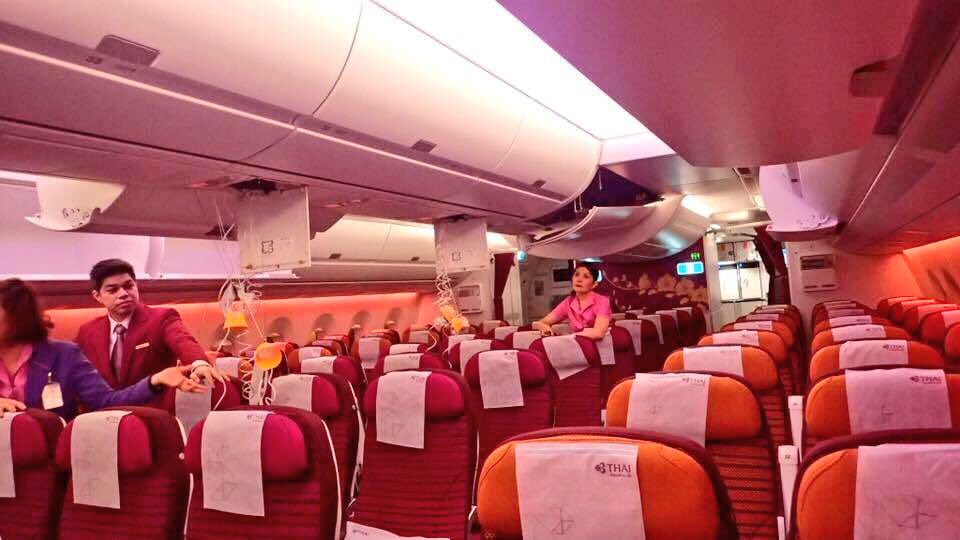