Ahead of an official Air Force study on the future tanker, expected to begin within the next six months, industry is already gearing up to solve this problem.
Laurent Simon

Boeing is developing a roll-on/roll-off aerial refueling kit, which would give the V-22 the ability to refuel other aircraft. Having an aerial refueling capability that can be based off Wasp-class amphibious assault ships would increase the striking power of Marine F-35Bs, as they would not rely on refueling assets that could only be based on full-sized Nimitz-class aircraft carriers or from land bases. The roll-on/roll-off kit can also be applicable to intelligence, surveillance, and reconnaissance functions.[136] Boeing funded a non-functional demonstration on a VMX-22 aircraft; a prototype kit was successfully tested with an F/A-18 on 5 September 2013.[137]
The high-speed version of the hose/drogue refueling system is designed to be deployed at 185 kn (213 mph; 343 km/h) and function at up to 250 kn (290 mph; 460 km/h). Onboard tanks and a roll-on/roll-off bladder can contain up to 12,000 lb (5,400 kg) of fuel. The operator must open the ramp to extend the refueling hose, then raise the ramp once extended, with the top ramp door left open. The V-22 could refuel rotary-wing aircraft, but it would require a separate drogue used specifically by helicopters and a partially converted nacelle. Bell and Boeing are hoping for funding for additional testing to include contact between the refueler and receiver and eventually the passage of fuel.[138] Since many Marine Corps ground vehicles can run on aviation fuel, a refueling V-22 could also service them. In late 2014, it was stated that such tankers could be operational by 2017.[139]

While the Navy has not declared a firm interest to use the V-22 Aerial Refueling System (VARS) on its planned COD fleet,[140] on 22 February 2016 Boeing confirmed that it expects to sign a development contract with the US Marine Corps (USMC) for the VARS system in the first quarter of 2016. Boeing had conducted an internally financed proof of concept for the roll-on/roll-off capability, with the anticipated USMC contract providing funds to "productionise the kit". VARS would become operational in FY 2018 and would allow the Osprey to become the USMC's recovery tanker; when aircraft land on USMC amphibious ships, they sometimes need additional fuel while they wait for available deck space.[141] In October 2016 Cobham was contracted to adapt their FR-300 hose drum unit as used by the KC-130,[142] as part of the 26 May 2016 contract award to Boeing.[143]

The KC-10 Extender first flew on 12 July 1980, but it was not until October the same year that the first aerial refuel sortie was performed.[6][7] The design for the KC-10 involved modifications from the DC-10-30CF design. Unnecessary airline features were replaced by an improved cargo-handling system and military avionics.[8] Meanwhile, the KC-10 retains 88% commonality with its commercial counterparts, giving it greater access to the worldwide commercial support system.[4] Other changes from the DC-10-30CF include the removal of most windows and lower cargo doors.[9] Early aircraft featured a distinctive light gray, white and blue paint scheme, but a gray-green camouflage scheme was used on later tankers. The paint scheme was switched to a medium gray color by the late 1990s.[10] 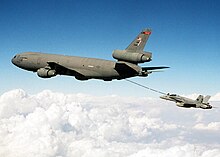 The KC-10's mixed refueling system of hose-and-drogue and flying-boom allow it to refuel the aircraft of the U.S. Air Force, U.S. Navy, U.S. Marine Corps and allied forces.[6]
The most notable changes were the addition of the McDonnell Douglas Advanced Aerial Refueling Boom (AARB) and additional fuel tanks located in the baggage compartments below the main deck. The extra tanks increase the KC-10's fuel capacity to 356,000 lb (161,478 kg), nearly doubling the KC-135's capacity.[6] The KC-10 has both a centerline refueling boom—unique in that it sports a control surface system at its aft end that differs from the V-tail design used on previous tankers—and a drogue-and-hose system on the starboard side of the rear fuselage. The KC-10 boom operator is located in the rear of the aircraft with a wide window for monitoring refueling. The operator controls refueling operations through a digital fly-by wire system.[10][11]
Unlike the KC-135, the KC-10's hose-and-drogue system allows refueling of Navy, Marine Corps, and most allied aircraft, all in one mission.[6] The final twenty KC-10s produced included wing-mounted pods for added refueling locations.[2] The KC-10 can also carry a complement of 75 personnel with 146,000 lb (66,225 kg) of cargo, or 170,000 lb (77,110 kg) in an all-cargo configuration.[6] The KC-10 has a side cargo door for loading and unloading cargo. Handling equipment is required to raise and lower loads to the cargo opening. It can carry cargo and serve as a tanker on overseas missions.[1]
Beochien

In the shorter term, another avenue to be explored is the provision of fee-for-service refueling capability to address ad hoc requirements and increasing shortfalls in tanker capacity. Civilian contractors such as Omega Aerial Refueling Services have been active in the sector with drogue-equipped 707 and DC-10 converted airliners for some years, notably in support of the U.S. Navy. One-off refueling services for large exercises and international deployments have been provided, and the contractor has also supplied ferrying support for the deliveries of fighters from U.S. manufacturers to overseas customers.
Laurent Simon 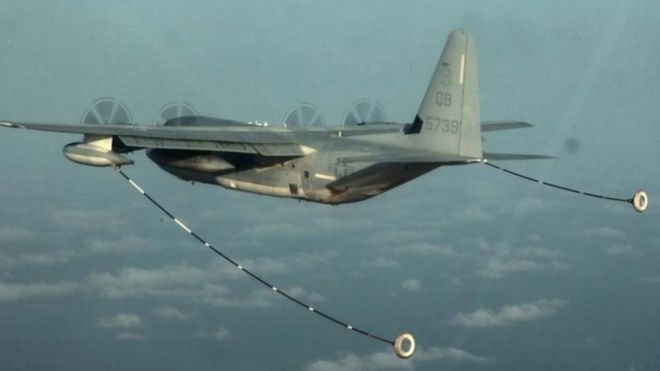 ...
In 2016, the head of Air Mobility Command announced KC-Z, an effort to develop a new tanker that could fly into dangerous airspace without being detected. But Air Force Chief of Staff Gen. Dave Goldfein told Aerospace DAILY here Jan. 26 when questioned about a next-generation tanker or fighter that the service is no longer in the platforms business.

“The days of buying individual platforms that we then described as game changers—those days are behind us,” Goldfein said. “There actually are no silver bullets on the horizon.”
Goldfein believes future warfighting will involve a combination of platforms and sensors and how those capabilities are connected.