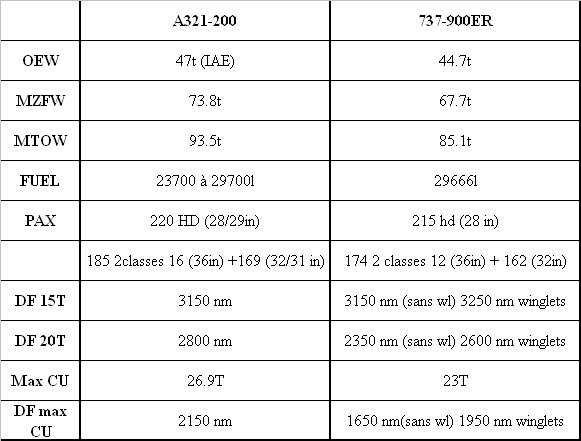 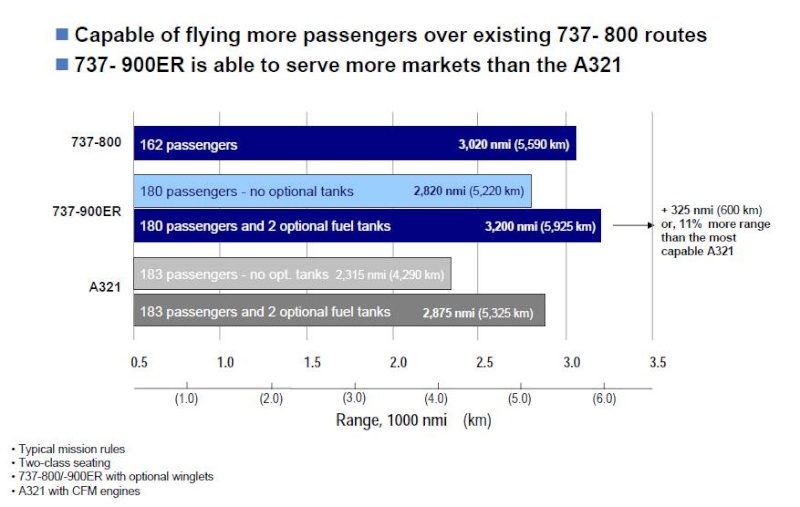 
In addition to the additional exits and range, Randy Tinseth, VP-marketing, wrote upon the launch of the -900ER programme, that, “Several improvements to the wings and flap systems and optional blended winglets and auxiliary fuel tanks allow the 737-900ER to have a range of 3,200 nautical miles (5,900 km). So, for dual-class operators, while they weren’t going past 189 passengers, they now have an extra amount of range.”

Sales continued to be slow, with Boeing initially promoting the -900ER as a replacement for the Boeing 757.

In another one of his blog columns, Tinseth wrote, “One of [Airbus'] recent marketing thrusts has been around “sharklets” for the A320 family, and along with that what I find interesting is that Airbus is positioning the A321 as a potential replacement for the 757.

“Why is that interesting? Because the best possible 757 replacement already exists — the 737-900ER.”

At the same time, Boeing acknowledged that the -900ER fell short of the 757, an aircraft that with winglets is capable of trans-Atlantic routes. At the roll-out of the first Boeing Sky Interior installed on a customer’s airplane, John Hamilton, an engineer on the 737 program, acknowledged that the -900ER can only do about 80% of the missions of the more capable 757-but he argued that this is enough, at least for now.

In recent times, Boeing’s messaging changed from being a 757 replacement – which the aircraft never truly was – to emphasize up-gauging and lower cost per available seat mile (CASM).

Jeff Knittel, president of CIT Aerospace, is the first lessor to buy the -900ER, and gave this perspective to CAO in an interview:

“A couple of things happened to transform the potential for the -900ER. Customers are up-gauging to drive lower-cost available seat miles. The -900ER improved with the current PIP (Product Improvement Program, in which Boeing and CFM provided another 2% better fuel consumption). Along with a generally improving economy, the 757 is beginning to come near the end of its life.”

The -900ER cost per available seat mile compares favorably to the 757 and Knittel noted that the -900ER is common to the more popular -800, while the 757 is a different fleet type for 737 operators.

“The 757 excels at the edge of its operating performance but the -900ER fits better in scheduled operations of 180 seats.”

Ron Baur agrees. He is VP of Fleet for United Continental Holdings, and the head of fleet acquisition at Continental Airlines prior to the merger and he was responsible for ordering the -900 standard and -900ER.

Indeed, according to information filed with the US Department of Transportation, compiled by the consultancy AirInsight for this article, the hourly cost of a 737-900 operated by Continental Airlines is actually about $250 per hour less than a 737-800 and nearly $1,300 per hour less than a 757-200 at the same carrier. Continental’s 757-300 costs just $7 per hour more than the 757-200, according to the DOT figures.

Alaska Airlines is the only other US carrier operating the 737-900. While Continental operates both the standard and the -ER, and doesn’t break out the costs in the DOT filings, Alaska’s fleet is currently only the standard. It recently ordered the -900ER, with first delivery in 2013. Alaska’s costs are about $600 higher per hour for the -900 vs. the -800.

Andrew Harrison, vice president of planning and revenue management, said Alaska uses the -900 on mid-continental routes such as Seattle-Dallas and Seattle-Minneapolis and Seattle-Alaska because of range limitations. The -900ER will have winglets and an auxiliary fuel tank, which will allow trans-con service from Seattle-Boston and Newark, Seattle-Miami with some seasonal restrictions and Seattle-Honolulu/Kona, also with some seasonal restrictions of perhaps 10 passengers.

Harrison says industry capacity reductions have driven load factors from the 60% range in 1995 to lower 80%.

Continental’s Baur acknowledged the -900 standard has its limitations; it can go as far as Newark to Salt Lake City but not to the West Coast, nor from Los Angeles to Hawaii. But the aircraft works well between Newark and Florida, for example, where extra capacity over the 737-800 is needed but not the range. Baur says Continental’s scheduling department segregates the -900 standard on routes like these.

“The -900 [standard] was essentially an elongated -800 without increased weight,” Baur says. The -900ER has the range to go US trans-con and West Coast-Hawaii, providing more flexibility.

Boeing hasn’t previously pushed sales of the -900ER, says Knittle and others with knowledge of the situation. “I think they were focused on the -800 because the aircraft worked well and the -900 [standard] was short on range. It was an iterative aircraft . But the drive on seat mile costs has heightened in the last year.”

Baur says people “are very comfortable” with the -800. “We value range. For us it was obvious the airplane had the range.”

“The 737-900ER is an interesting aircraft,” says Jay Hancock, managing director of fleet transactions. “We continue to evaluate it along with other future alternatives. We certainly are not at the point where we can make any decisions at this time. We not only have to consider the mission of any new aircraft in itself, but also consider other factors such as what our overall network will look like in the future, as well as how other aircraft types that will be in our fleet will impact the need for another version of the 737 beyond our current 737-800s.”

With Boeing’s sales team now pushing the -900ER more than in the past, additional sales are expected this year. 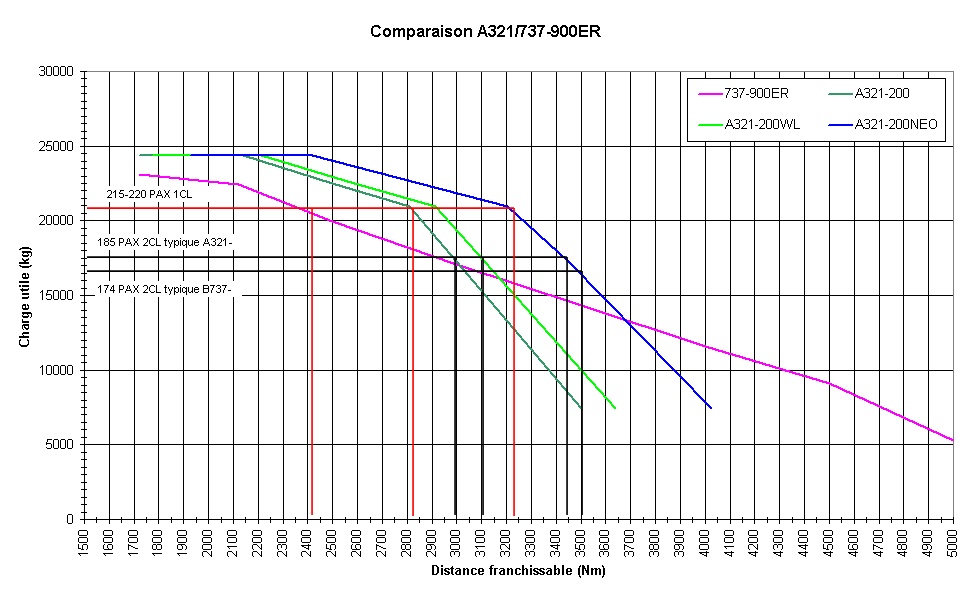 Boeing
and American Airlines announced a partnership at the Paris Air Show
Wednesday to bring an "evolutionary ecoDemonstrator program" to reality
next year.
A 737-800 will be used to flight test and "accelerate the market readiness of emerging technologies," the companies said (ATW Daily News, Aug. 10, 2010).
The AA 737-800 and a twin-aisle plane to be identified later this year
will serve as the flight test component for US FAA's Continuous Lower
Energy Emissions Noise (CLEEN) program first announced at ATW's 2010 Eco-Aviation conference (ATW Daily News, June 25, 2010).
Boeing and an AA engineering team are finalizing plans for installing
the initial technology applications aboard the 737-800. Installed on the
aircraft, which will conduct the test flights in 2012, will be
adaptable trailing edge technology that reduces noise and emissions
during all phases of flight including takeoff, cruise and landing.
Another onboard technology will be the variable area fan nozzle, which
reduces community noise and enables advanced engine efficiency
technologies. Boeing will include regenerative fuel cells for onboard
power.


Our conclusion: the A321neo is the better 757 replacement.
The 8 page report may be purchased here for $49.