Lufthansa expects its cargo and maintenance businesses to continue feeling the impact of the global
economic crisis until at least 2010, reports in company employee newspapers show.

The company has taken two MD-11 cargo planes out of service as part of a plan to cut capacity by 20
percent, the Lufthanseat newspaper reported this week. The company had already said it would shorten working hours for cargo employees.

A spokesman for the company said the two planes would remain grounded until October 2010. Another two cargo planes are currently not being used but have not been taken out of service.

In the first nine months of 2008, the cargo division generated about 16 percent of Lufthansa's group
operating profit, and Lufthansa Technik contributed 23 percent. Lufthansa is scheduled to publish full-year 2008 results on Wednesday.

Airlines around the world have cut capacity and grounded aircraft in response to a drop in demand for air
travel. Businesses are reducing their travel budgets and consumers are also keeping a tighter hold of their purse strings.

"Older aircraft or those needing an overhaul are taken out of service first," Heerdt said.

He said that from 2011, there would be slight market growth, though the impact of the crisis would
still be felt for several years.

Lufthansa Technik is the world's third-largest company offering engine maintenance, repairs and
overhauls, with a market share of around 8 percent, according to 2007 figures published by rival MTU Aero Engines.

To generate new business, the company planned to expand in the Middle East and Africa.

Lufthansa increased the number of deactivated aircraft from 20 to 24 last month in response to falling demand, a source close to management told ATWOnline.

LH Chairman and CEO Wolfgang Mayrhuber previously had said that parked aircraft will vary in size
between the CRJ200 and the A300-600, with those two types being the most common.
LH Cargo has removed four MD-11Fs from service.

Lufthansa’s passenger numbers declined in the first three months of 2009 under the impact of the downswing and the persistently difficult economic situation.
The biggest German airline failed in the circumstances to match the previous year’s record figures.

The passenger count in the first quarter was down by seven per cent to 12.1 million.
Capacity was reduced by 3.3 per cent to accommodate falling demand.
Revenue seat–kilometres fell by 7.2 per cent.
The passenger load factor declined by 3.1 percentage points to 74.1 per cent.
Passenger numbers were down in all traffic regions.

Overall in the first three months of the year, Lufthansa and SWISS together carried 15
million passengers, which is six per cent less than in the first quarter in the previous year. About three million of those were transported by SWISS.
The number of flights operated by the Lufthansa Group declined by 4.1 per cent to
187,738.

Freight tonnage transported and utilisation also fell at Lufthansa Cargo in the first quarter. Altogether, the Lufthansa airfreight subsidiary transported 328,000 tonnes of cargo and mail, which is 23.4 per cent less than the year-earlier level. Utilisation in the cargo business fell to 57,6 per cent.

The Lufthansa Group’s first-quarter business figures will be published on 30 April
2009 and will then be available for download from www.lufthansa.com/investor-relations. 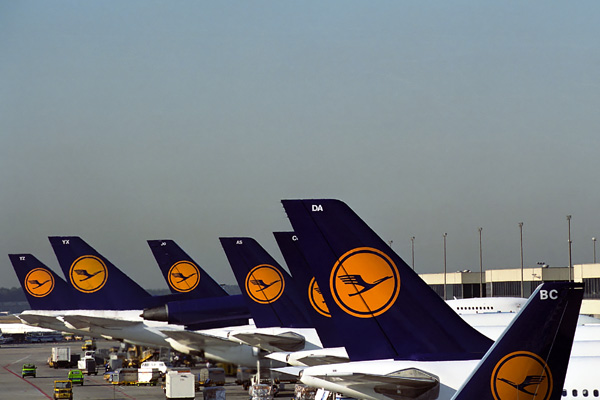 Lufthansa Group has named Swiss International Air Lines chief executive Christoph Franz as its deputy chairman, while Harry Hohmeister will succeed him as the head of Swiss.
The changes in the carriers' senior management, which will take effect from 1 June, will potentially position Franz to take over from Lufthansa chief Wolfgang Mayrhuber when his term expires next year.

Lufthansa has increased the number of seats on its executive board from three to four in order to accommodate Franz. The company is also shuffling responsibilities in order to ease the integration of other airlines into the group.

"We are equipping ourselves at the right time for future tasks and challenges," says Mayrhuber. "This is a logical step necessitated by the growth and gratifying development of the group in recent years as well as by the expansion of the group airline network.

Franz will head a new division which will be responsible for Lufthansa's passenger airlines.

Executive board member Stefan Lauer will head a new division, group airlines and corporate human resources, which will emerge from the current aviation services and human resources arm.
It will manage group carriers not included in the arm being led by Franz, and develop co-operation between Lufthansa's current and prospective subsidiary airlines - including Swiss, Brussels Airlines, Austrian and BMI - and others.

Lufthansa's finance division will be extended to include aviation services, with executive board member Stephan Gemkow in charge of the maintenance, catering, logistics and information technology units.
Swiss' new chief executive, network and distribution head Harry Hohmeister, will take up his post on 1 July. Until then he will serve as deputy chief to Franz.
"We will continue to flexibly align our capacities to changed and changing demand," says Hohmeister. "And we'll continue to work hard on our costs. In these crisis times, more than ever, we'll be keeping a firm and constant focus on our customers in everything we do."
Hohmeister formerly worked for Lufthansa, becoming responsible for the German carrier's network, before leaving in 2000 to join Thomas Cook Airlines and, in 2005, Swiss.

Lufthansa's chief executive said he now sees an operating loss for the company's cargo business as the global economic crisis continues to pummel the aviation industry.

The recession and resulting demand decline "left their mark" on Lufthansa Group's first-quarter
performance, Chairman and CEO Wolfgang Mayrhuber and other senior officials said in a note to shareholders yesterday, pointing to steep drops in business passengers and cargo in explaining a net loss of €256 million ($333.8 million) on a more than 10% decline in revenue.

The results, first revealed Wednesday in a preliminary report, are no reason to abandon LH's long-term strategy of becoming a "system of independent airlines" with multiple
European power bases, executives emphasized. "Even if current conditions are turbulent, we are convinced of the long-term growth potential of the aviation market," they wrote to shareholders, noting that the company is "adjusting where necessary" but is still "ready to act when opportunity knocks" and continues to "advance our ongoing transactions" aimed at making LH the primary player in a consolidated European market.

The near-term adjustments include parking 22 passenger aircraft by year end, grounding two MD-11 freighters in the first quarter with two more of the type to be decommissioned by Oct. 1, and discontinuation in the year's first three months of one MD-11F and one 747-400F operated for LH by World Airways. LH Cargo's MD-11 capacity has been reduced by around 20%, it said.

While the airline company continues to insist that its overall operating profit for the full year will be
positive ), it projects that LH Cargo will incur "a substantial operating loss." On the passenger side, "the drop in demand was accompanied by a tangible change in travelers' habits," LH said, noting a "migration from the premium segment. . .to the economy class" that hurt yields.

The passenger airline group posted a quarterly revenue drop of 11.4% to €3.61 billion and incurred a €30 million operating loss and a €24 million net loss, reversed from a positive operating result of €37 million and a net profit of €26 million respectively in the year-ago period. RPKs slid 6.1% to 32.67 billion as ASKs dipped 2.1% to 44.18 billion.

• Average fuel burn per passenger is 4.3 litres over 100 km
• 120 environmental measures implemented in 2008
• 194 million euros invested in training and further education
• 36,000 employees at Frankfurt base

The 2009 edition of Lufthansa’s sustainability report
is now available. It contains extensive information on the Group’s
commitment to ecological, community and societal issues in pursuit of
its business activities. “Economic success is the fundamental
prerequisite for fulfilling our self-commitment to performing equally
well in other disciplines of sustainability – environmental care and
social responsibility. “Balance” shows that we make investments not
only in the latest technologies but also in people. That is our
contribution to safeguarding the future,” said Lufthansa Chairman and
CEO Wolfgang Mayrhuber.

Lufthansa has an excellent reputation, worldwide, as an employer – and not without
reason: In 2008, the Group invested 194 million euros in the training
and further education of its employees. Among others, it also took on
3,715 new Service Professionals. At year-end 2008, the Lufthansa Group
was employing a total of 107,800 people from 125 nations. Of the total,
35,536 were employed at the Group’s biggest base in Frankfurt am Main.
Flexible work-time models have long since been an established element
of corporate life. The number of staff on part-time now accounts for
26.5 per cent of the total workforce; 42.7 per cent of female employees
work on a part-time basis.

In 2008, Lufthansa again invested immense effort in measures to protect the climate and the
environment. Fuel consumption of the Lufthansa fleet now stands at 4.34
litres per 100 passenger-kilometres. The most fuel-efficient aircraft
in the Group with an average fuel burn of only 3.24 litres is the
Airbus A340-300 operated by SWISS. During the year, concrete measures
were implemented in more than 120 environmental projects in order to
husband resources and reduce the impact of aviation on the planet.
Lufthansa Flight Training, for example is saving 80 per cent of energy
consumption by utilising new flight simulators, Lufthansa Cargo’s
environmental management system has been certified to the ISO 14001
international environmental standard and the Company is testing
lightweight containers to save on fuel and reduce carbon dioxide
emissions. Variable steering of cold storage equipment at LSG Sky Chefs
has reduced energy consumption by 30 per cent. The new engine water
wash method developed by Lufthansa Technik can reduce the fuel burn of
the Lufthansa fleet by up to 25,000 tonnes of kerosene and thereby curb
CO2 emissions by more than 78,000 tonnes.

That sustainable corporate development is a fact of life at Lufthansa is evidenced by
its inclusion in the prestigious Dow Jones Sustainability Index. Only
three of the world’s airlines are in the Index. Lufthansa was again
included for the umpteenth time in September 2008 and scored the
highest rating yet for its environmental performance. “Balance“, which
has been published since 1995, highlights informatively the importance
attached to sustainability by the Lufthansa Group. A free copy can be
ordered online at www.lufthansa.com/responsibility or from Deutsche
Lufthansa AG, “Balance“, 60202 Frankfurt“

German flag-carrier Lufthansa is braced for a possible further delay
to its Boeing 747-8 aircraft in the wake of the newly-disclosed
problems with the 787.
The carrier, which has an order for 20 passenger 747-8s, is
remaining committed to the type. It is not seeking to defer deliveries
of the 747-8 or its Airbus A380s.
But chief financial officer Stephan Gemkow, in an investor
presentation on 25 June, said the "quite spectacular" revelation about
the latest 787 delay was likely to have a knock-on effect on the larger
Boeing's development.
"I'm sure the delay of the 787 will mean that they have to pull in
more engineering resources, and that will [mean] even further delays,
as a consequence, for the 747-8," says Gemkow. "I would not be
surprised to learn this some weeks and months in the future."
He says that, despite the economic slowdown, the carrier has "not undertaken any effort so far to postpone any delivery".
Lufthansa vice-president of strategy Harald Deprosse backs Gemkow's
statements, saying that the carrier is "sticking to its decision" to
acquire the 747-8 and adding that there is "no discussion of a
different development".
Deprosse says the airline is to receive five A380 aircraft next year
for operations from Frankfurt Main and that the A380 summer 2010
schedule is on track.
Lufthansa has been examining about 20 destinations for the type and
while it has not confirmed its first routes, a source familiar with the
strategy indicates that New York will be a priority.
Deprosse says that Lufthansa's A380 plans initially centre on
delivery of 10 aircraft. "There are further five aircraft which were
part of the original deal, back in 2001, when Lufthansa ordered 15
A380s," he says.
"But it's a mixture, it's a firm order for the first 10 and there is
an option for a final decision for number 11 to number 15. This has
never changed, this was the original negotiation in the deal that we
had with Airbus."