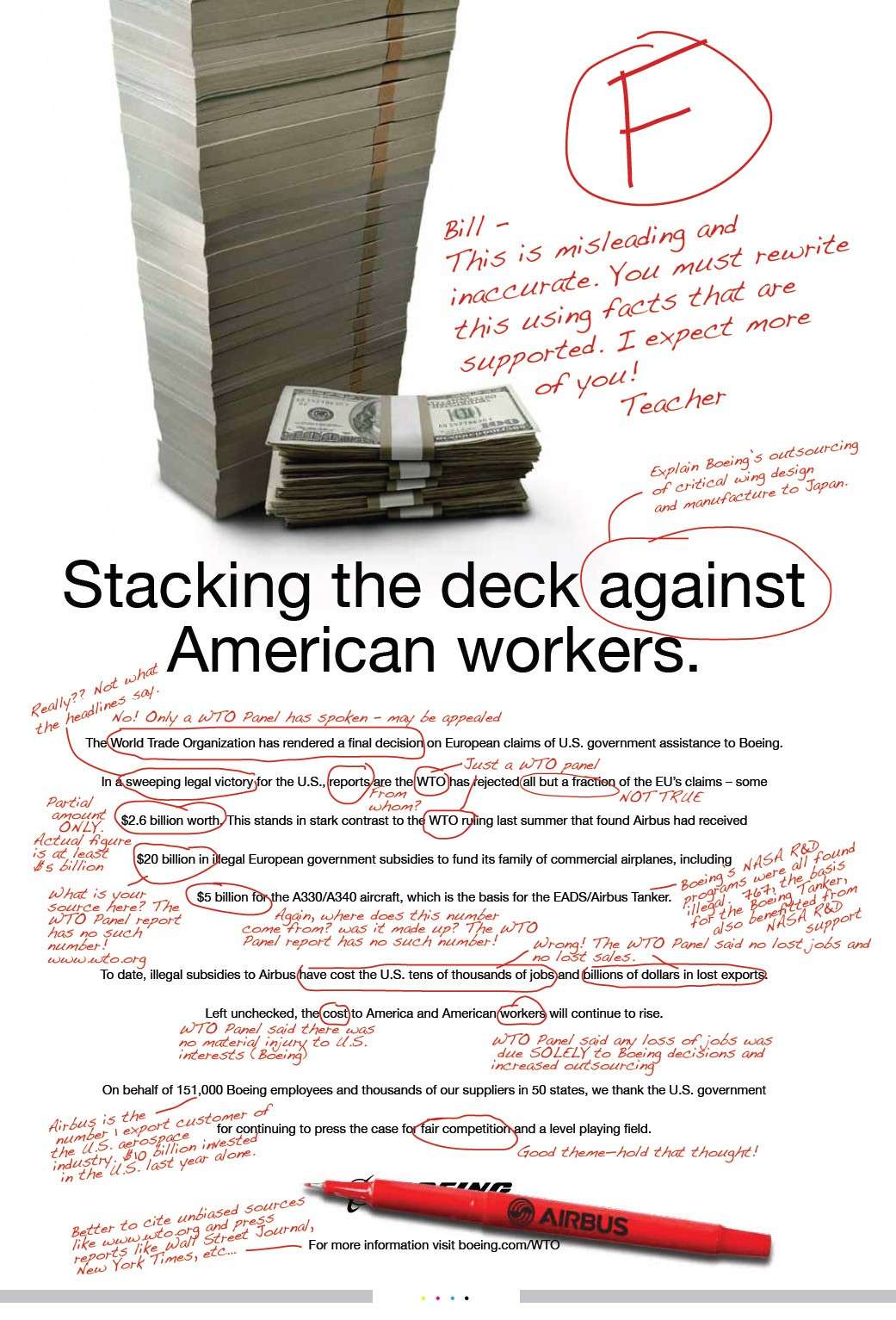 The Defense Department insists the winner would be decided on the merits of the bids. The department hoped "to make an award within a month or so," comptroller Robert Hale told reporters Feb. 14.

Analysts expect the decision will be announced in March.

EADS is competing for the military contract without a main partner, but with support from a number of U.S. equipment makers.

Crosby recalled that its last bid, with U.S. defense giant Northrop Grumman in 2008, won the contract because the price was 6.0 percent lower than Boeing's offer.

That decision was withdrawn after the congressional watchdog, the Government Accountability Office, upheld Boeing's objections.

Crosby said that because the Airbus rate of production has increased, EADS's price advantage "may be greater than that" 6.0 percent difference and "almost certainly the development costs will be less."

Crosby sidestepped a question on what would be EADS response if the Pentagon changed its mind on a single-source contract and opted to split the contract between the rivals.

The EADS North America chairman highlighted that the Air Force request for proposal for the contract allows "one or more" contracts and included a variance in quantity (VIQ) pricing component.

"I believe that this Pentagon is dead-set on a single award," he said.

However, he said, by asking for the VIQ "they cover a range beyond the nominal 15 aircraft a year."

"The foundation of our offering is at least one aircraft a month or 12 a year," he said.

As the KC-X competition enters perhaps its final week, EADS North America has revealed a major shift in pricing strategy and outlined how its proposal may prevail over Boeing's bid.

After a seven-month evaluation phase, the US Air Force allowed both competitors to submit final changes on 11 February. A week before the deadline, EADS chief executive Tom Enders ruled out making any "hectic, last-minute" changes before the deadline, according to a Reuters story.

However, EADS officials in the US changed their minds over the next six days.

The air force's "refinement of our understanding and our refinement to them of our proposal built the case of, 'hey, we could in fact revise our price from the initial bid," Crosby says.

For example, the air force clarified a requirement for an onboard inert gas generation system [OBIGGS] listed in the request for proposal. That allowed EADS to reduce their cost estimate for providing the system, Crosby says. Another example is the initial requirement for a large aircraft infrared countermeasures [LAIRCM] system, which the air force decided to provide as government furnished equipment.

Price is the key factor in the air force's evaluation process for KC-X. To measure the price of both proposals, the air force multiplies each bid by a factor of 1.25, then adjusts the estimates based on an analysis of lifecycle fuel and infrastructure costs. A mission-based assessment, which rewards the aircraft that performs better in simulations, also adjusts the price.

Crosby concedes that Boeing's smaller KC-767 will likely beat the KC-45 on fuel burn and infrastructure costs. But he estimates the difference amounts to no greater than $1.5 billion over 30 years. Boeing, however, advertises that the KC-767 lifecycle operating costs will be $36 billion cheaper over the same period.

The KC-45's bigger size may be an advantage in the mission-based refuelling assessment, Crosby says. The same aircraft scored 6% higher than the KC-767 in the previous competition, which was awarded to the KC-45 before a protest over-turned the decision. Based on the models used in this competition, the KC-45 could beat its competitor by an even greater margin, Crosby says.

The most important factor, however, may be the price submitted by each bidder for development and production. As the larger aircraft, the KC-45 would seem to be the most expensive. Crosby, however, insists EADS has an opportunity to underbid Boeing.

In the last competition, the KC-45 was initially judged cheaper than Boeing's proposal. Since then, Northrop Grumman has withdrawn as prime contractor for the EADS bid, lowering the KC-45's cost base. Crosby also notes that Airbus is ramping up production of the Airbus A330, although Boeing has announced similar plans for the 767.

"How those criteria and factors are added together," Crosby says, "[are why] we feel very good about the opportunity."

Two top Defense Department officials today (Feb. 16) told a conference sponsored by Aviation Week magazine that the contract award for the KC-X could be made by the end of the month.

The buzz in Washington is that it will be after the stock market closed on Friday, Feb. 25.

The statements by the DOD officials are summed up nicely in this Defense News article.

At the same Aviation Week conference, the Pentagon’s top buyer, Ashton Carter, repeated remarks he made a week earlier at the Cowen & Co. aerospace and defense investors’ conference February 9. At the Cowen event, the headlines to come out of it were remarks made by Boeing CEO Jim McNerney about the prospect of proceeding with an all-new replacement for the 737.

The headline that did not come out of it was from a speech presented by the Pentagon’s top buyer, Ashton Carter. Elements of his speech did, indeed, make news. However, buried in his speech as the last topic were his comments about globalization and procuring key defense systems from non-US companies.

Is this laying the groundwork for selecting the EADS North America KC-45 tanker in the KC-X competition? DOD Buzz picked up on this, too, but well down its story.

Perhaps this is too much “Kremlinology” but carefully read his remarks:

In the industry that supports these international security efforts, we likewise simply cannot avoid or wall ourselves off from globalization. Depending on the program, from a few percent to much more of the value-added in defense goods and services is sourced overseas – mostly to companies that serve as subcontractors to U.S. primes and that provide, for example, a particular specialized part. Sometimes that is where the best technology or best value can be found, and when it is, we owe it to the warfighter to do so. Globalization of our market is not an option – it is a reality. Our utilization of, for lack of a better term, “non-heritage” firms is essential for nearly all of the systems upon which we rely. We are committed to continue opening our markets while at the same time striking the appropriate balance with security concerns. Just as we have opened our markets to the leading firms from around the world, we urge our partner nations to do likewise. Exports obviously strengthen our industry’s competitiveness, but they also enhance our security – and international security – when they build the capacities of international partners. We are doing our part by implementing President Obama’s reforms of our antiquated export control regulations and procedures, and we expect our efforts will result in increasingly open and fair competitions around the globe.

To summarize, our goals in the new era for our defense industry are:

* A strong, vibrant, and financially successful defense industry,
* Structural change largely through market forces but adjusted where the interests of the taxpayer and warfighter require,
* Preserving and enhancing competition,
* Equal attention to the health of smaller and mid-sized companies, spinouts, new entrants, and service providers,
* Encouraging open entry into the defense marketplace, and
* Full advantage taken of the opportunities of globalization

The Air Force is to announce its choice for a $35 billion contract to build 179 flying tankers at a Pentagon press conference at 2 p.m. Pacific time this Thursday, Feb. 24.

Behan said he expects Air Force officials will make some quick courtesy calls to political figures like Dicks who have been actively lobbying on the tanker contract, just prior to the press conference. He said he has had several confirmations of the Thursday date from within the Pentagon, which would place the announcement a day earlier than the Friday date some had expected.