The airline industry parked 1,167 aircraft last year "making 2008 the worst year for cutbacks since 2001," according to Ascend.

The total number of stored jets is approaching 2,300, representing more than 11% of the global air
transport fleet of 20,293, and the number should rise significantly this year as "at least 400 more aircraft are scheduled to be cut during 2009," Ascend's Chris Seymour said.

The current downturn is approaching in severity the situation at the end of 2001 when 13% of the world
jet transport fleet was in storage. At that time the fleet comprised 15,950 aircraft, "so a similar share in 2009 could mean a total of some 3,000 idle airliners," the UK consultancy noted.

North American airlines have a big head start in grounding aircraft, having announced fleet reductions
totaling almost 800 since mid-2008. The decision to ground these aircraft is cited by analysts as the main reason US carriers are in better shape to weather the downturn than their counterparts in Europe,
where 450 aircraft are being parked, according to Ascend, and the Asia/Pacific region, where at least 230 are to be grounded. 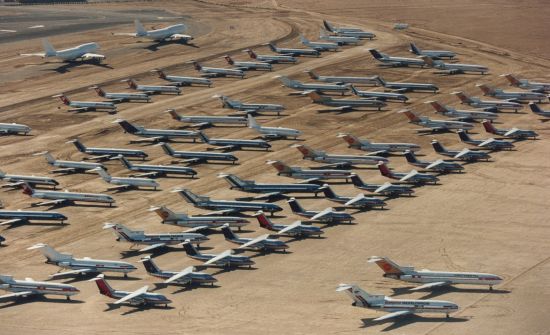 VICTORVILLE, Calif. — With the economy in a tailspin, aircraft "boneyards" across the country are filling up with Boeing 747s and other jetliners no longer needed to ferry passengers. Call it airline limbo.
Carriers are grounding airplanes at a rate not seen since the Sept. 11 attacks, and industry experts say 2009 figures to set a record for planes sitting on the ground.
That has meant job security for Richard Robertson, an aircraft mechanic at the Southern California Logistics Airport in Victorville, formerly George Air Force Base, now one of the nation's busiest boneyards.
Robertson has perfected the art of "pickling" airplanes, aviation jargon for disassembling parts and draining fluids so aircrafts can be stored for a long time.
"It's unfortunate, but when the economy is bad we're doing good," Robertson said as he pulled a cockpit instrument off a 727 last week so it could be stored for later use.

The jet, its windows covered in aluminum foil and engines removed, will be towed to a sprawling lot that resembles a used-car dealership. It is filled with rows of planes that months earlier had crisscrossed the Pacific Ocean or hopped across the Midwest.
High fuel costs last summer drove many airlines to ground older, gas-guzzling planes. Since then, a recession-induced travel slump has led carriers to take even more planes out of the sky.
Passenger traffic for the nation's largest carriers dropped an average 11 percent in February compared with a year earlier, with United Airlines plunging 17 percent. That was the carriers' 18th consecutive monthly decline.
Several big airlines that already had pared their schedules said last week that they would slash even more flights because demand was falling further.
The latest rush of airliners to Victorville began in October. Before long, there were 100 aircraft on the tarmac, then 150, and by last week the roster had swelled to nearly 200, making the outpost more crowded at times than Los Angeles International Airport.
About 80 miles northeast of Los Angeles, Victorville is home to one of three major commercial boneyards in the U.S. The others are in Arizona and New Mexico, where grounded planes are also piling up.
Mothballed military aircraft such as fighters, bombers and cargo planes end up at Davis-Monthan Air Force Base in Arizona.

We're seeing consistent growth and anticipate growth for another six months," said Steve Coffaro, vice president of marketing for Evergreen Maintenance Center in Marana, Ariz. He counted 198 planes in his lot last week, twice as many as several months ago.
The Victorville airport is not bursting at the seams but is getting closer to its maximum capacity of 300 aircraft, said Jeff A. Lynn, general manager for Southern California Aviation, which provides "transitional parking" for grounded planes.
Based on recent airline inquiries about available space, an additional 50 planes or more could arrive by summer, Lynn said, adding that "we could run out of room" if more 747 jumbo jets arrive; they take up two spaces.
Airlines like to park their planes in the desert because the dry weather prevents corrosion and helps preserve aircraft longer.
Each airline has its preferred way of storing aircraft, which could include draining the fluids, covering the windows and moving it slightly by tow truck every 14 days to even out the tires.
Planes that are not expected to return to service are stripped of parts or "chomped" into pieces to be recycled as scrap.
"Boneyards are purgatory for airliners," said aviation consultant Michael Boyd, who estimates that only about 10 to 20 percent of the planes will leave.
"They sit there for a while before they're turned into beer cans."
Or until they're sold. Older aircraft no longer wanted by the U.S. carriers often find their way to Africa or Latin America. Buyers are expected to see some of the lowest prices for used airplanes in decades.
Last year, nearly 1,200 planes worldwide were grounded, making it the worst year for fleet cutbacks since 2001, according to London-based aviation consulting company Ascend Worldwide.
An additional 675 aircraft could be parked this year. If that happens, a record percentage will be sitting on the ground rather than flying.
"Fleet reduction is the most efficient way to reduce capacity," said Jean Medina, spokeswoman for United Airlines, which began phasing out gas-guzzling 737s last fall.
Many planes are for sale, but if the airline doesn't find buyers, the aircraft are sent to the boneyard to wait out the lull or dismantled for parts, Medina said. "We've been working to sell these where we can."
Leasing companies are also grounding planes because fewer airlines are renewing their leases. In some cases, the companies park the planes rather than slash lease rates, said Richard Aboulafia, aviation analyst for Teal Group.
The boneyards are expected to remain busy this year.
Lynn's company has been growing steadily since airlines began grounding planes. Its payroll increased 30 percent since last fall. The company has 150 employees and needs more aircraft mechanics.
But Lynn said the company has been cautious in its hiring to avoid the "boom-and-bust" cycle that has characterized the business for decades.
"We're trying to be careful about ramping up too fast," he said.
Invité 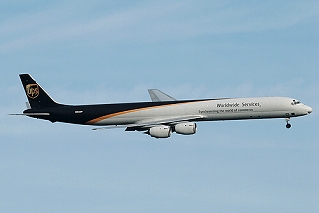