Privately-owned Mongolian carrier Eznis Airways is negotiating with aircraft-maker ATR to acquire an ATR42-500 and wants to put it into operation at the end of May when the northern summer travel season commences.

Eznis CEO Glen Pickard says the airline's board has granted approval for it to acquire a new ATR 42-500 and
the carrier is now negotiating with ATR and securing financing.

The airline plans to place an order for one ATR 42-500, possibly with an option for a second for delivery
in 2010, says Pickard.

It wants the first aircraft delivered in time so it can complete training and put it into service at the
end of May, he adds. Mongolia's peak travel season starts at this time because that is when the warmer weather kicks in.

He says the carrier did consider Bombardier but ruled out the Canadian aircraft-maker because the
airline wants a new 50-seat turboprop and Bombardier has announced it will stopmanufacturing the 50-seat Q300….http://www.flightglobal.com/articles/2009/01/07/320716/mongolias-eznis-to-order-atr-42-500.html


European turboprop manufacturer ATR booked 42 new aircraft orders in 2008, lower than its forecast of 50, but has revealed several customers for its -600 series variant.

Its backlog of 169 aircraft, the second-highest in 18 years, includes 39 examples of the new -600
turboprop.

At a briefing in Paris today, ATR identified customers for these as Kingfisher Airlines, with 23 ATR 72-600s,
while Alenia has another 10 for the Turkish Navy.

First flight of the -600 series is expected this year, with deliveries beginning in 2011.

Regional aircraft manufacturer ATR has completed a series of ATR 72 steep-approach trials at London City with the aim of securing approval for the type to operate into the downtown
airport.

The tests, which included approaches, take-offs and ground manoeuvring, were performed on 30
January using an ATR 72 registered F-WWEQ and bearing the livery of Indian carrier Kingfisher Airlines.

Once the type is formally approved for City's 5.5° approach, Irish regional carrier Aer Arann is planning to deploy the type its new Isle of Man-London City service. It launched the
route on 19 January using ATR 42s, pending the larger variant's certification.

Manufacturers wishing to secure London City certification for their aircraft must demonstrate capability for an approach of up to 7.5°. The steep approach is required because of noise abatement issues and obstacles.
http://www.flightglobal.com/articles/2009/02/04/322058/video-exclusive-atr-72-undertakes-steep-approach-trial-at-london-city.html
Poncho (Admin)


ATR: 'A lot of interest' in potential larger turboprop
Tuesday April 7, 2009
ATR has had serious discussions with airlines and suppliers about producing a larger turboprop and has found "a lot of interest" in the manufacturer's building a bigger aircraft than the 70-seat ATR 72, Head of Sales John Moore told ATWOnline.

"We are certainly looking at that market and have had some very positive feedback from airlines that they do see a need for a larger capacity turboprop," Moore said yesterday. "There are a growing number of routes where the 70-seat turboprop is too limited."

Bombardier Commercial Aircraft President Gary Scott last month confirmed that his company intended to move forward with a stretch version of the 70-seat Q400 with first delivery likely in a 2013-14 timeframe (ATWOnline, March 27).

Moore said ATR's discussions with engine-makers (Pratt & Whitney supplies the PW127F to power the ATR 72-500) are particularly key regarding the timing of its decision to launch a larger turboprop program. "It has to have significant gains in efficiency," he explained, emphasizing that no decision had been made. The potential aircraft would "not be a stretch [of the ATR-72] but would be a new airplane," he said.

"......Several airlines have used the best-selling regional turboprop in a quick-turnaround convertible from VIP to shuttle or medevac, but last year the company took an order from a customer
in Azerbaijan to deliver a fully equipped VIP aircraft. 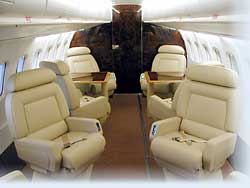 The company had indicated in May that the flight-testing of the ATR 72-600 could start in June.

But during the Paris Air Show last month the airframer confined itself to saying that the first flight would take place in summer.

A source familiar with the programme says that ATR has fixed a provisional date at the tail-end of the summer season, and that the turboprop will fly within the first two weeks of September.

Ground testing of the 72-600 started last year, with power-on taking place in December. The manufacturer is also developing a -600 variant of its smaller ATR 42 aircraft.

European turboprop manufacturer ATR has handed over the fourth and final VIP ATR 72-500 to the Royal Thai Air Force as interest in the executive version of its twin-turboprop regional airliner family continues to grow.

The Thai aircraft - used exclusively by the country's royal family, government and military officials - have helped to spur interest in the ATR 42 and 72, particularly from other customers in Asia, says ATR. "We have opened discussions with a number of potential clients in Asia and across the world who are looking for aircraft with low operating costs and large cabins," says the EADS and Alenia joint venture.

ATR has sold 12 VIP-configured ATRs since the 1990s - five 42s and seven 72s - but only recently launched a marketing effort to promote the types in the business aviation arena. "Although the airline market is our main focus, we are well positioned to provide a more cost-efficient alternative to other business aircraft available on the market and there is certainly demand for these aircraft in this economic climate," says the company.


Given that most VIP flights last no more than 2h, says ATR, "both the 50-seat 42 and 68-seat 72 aircraft have large cabins that can be adapted for a number of roles, such as group or executive transport".

The aircraft can also be re-sold into the airliner or cargo markets, "which boosts their appeal", ATR adds.

French airframer ATR has entered advanced discussions with Pratt
& Whitney and General Electric (GE) on powering a new, larger-sized
commercial turboprop, and says it will decide whether or not to launch
such a product next year.
"You know we are discussing with two to three engine manufacturers
but not just general discussions, but in a very detailed way, and namely
Pratt and Whitney and General Electric and they have very, very
interesting things for us," says Mario Formica, head of marketing for
ATR, the EADS-Alenia
joint venture, which manufactures the 50-seat ATR 42-500 and 70-seat
ATR 72-500.

ATR has been studying the 90-seat market. A decision needs to be
taken by 2011 since ATR "would like to enter into the market at around
2016", Formica said today during a press briefing at the Regional
Airline Association (RAA) convention in Milwaukee.
GE Aviation is offering a turboprop engine based on a derivative of
the GE38 turboshaft it has developed for Sikorsky's CH-53K heavylift
helicopter.
"The GE38 is the military turboshaft. What we're studying is a
derivative, a turboprop, that would use a lot of the core," says Chuck
Nugent, general manager of the CF34
turbofan programme. "That's what we're talking to airframers about."
Nugent says GE is confident the new turboprop engine can deliver
"double digit fuel burn improvement" than what is available on the
market today. GE is eyeing a service entry of 2015 for the engine.
Asked if GE might scale the programme to support a next generation
50-seat turboprop Nugent says: "Currently our thought process is to
utilise the core size defined by the GE38 and use that for potential
opportunities. Propose that for potential opportunities."
ATR, meanwhile, is also progressing with its Series 600 programme.
The airframer unveiled the -600 successor variant for its ATR 42 and 72
models in late 2007. Flight testing of the ATR 42-600 began in March.
ATR expects to receive certification in November 2010 with first
deliveries scheduled for the second half of 2011, says Formica.http://www.flightglobal.com/articles/2010/05/25/342404/atr-in-advanced-talks-with-ge-pw-for-large-sized-turboprop.html

Giugiaro Design has been involved in high profile car, corporate aircraft, train, ship and motorcycle design projects. But the ATR project is the firm's first commercial aircraft project.
"ATR was just the partner we were looking for to translate the know-how we attained in the car design field into the aviation sector. The project developed for ATR was extremely motivating and challenging: co-operating with such a world leader in the turboprop market meant remarkable, intense and interesting exchange of experiences and inspirations, which we think are key success factors, also for future programs," says Giugiaro Design co-chairman and styling director Fabrizio Giugiaro.
Visitors at next week's Farnborough air show will be able to see a full=-scale mock-up of the Armonia cabin.
ATR, meanwhile, is also seeing progress on other aspects of its Series 600 programme. The airframer unveiled the -600 successor variant for its ATR 42 and 72 models in late 2007. Flight testing of the ATR 42-600 began in March. ATR expects to receive certification in November 2010 with first deliveries scheduled for the second half of 2011.