After six months of intensive testing, the first Sentinel-2 satellite developed and built by Airbus Defence and Space for the European Space Agency (ESA) is getting ready for its mission in space. Sentinel-2A will be the second satellite of the Copernicus programme to be launched.

Copernicus is an operational programme led by the European Commission (EC) in partnership with the European Space Agency (ESA). The Copernicus Sentinels supply remote sensing data of the Earth to deliver key operational services related to environment and security.

“Sentinel 2 is the next important milestone to deploy Europe´s Copernicus programme for which Airbus Defence and Space is a key contributor. In particular, we are prime contractor for five of the seven Sentinel missions, and have built state of the art instruments and components for the others, such as the radar of Sentinel-1A that is working perfectly in orbit,” said François Auque, Head of Space Systems.

In IABG’s facilities in Ottobrunn (near Munich, Germany) Airbus Defence and Space engineers put Sentinel-2A through a rigorous test campaign that included acoustic testing to simulate the huge noise generated at launch, vibration and separation shock testing to simulate mechanical launch loads, and thermal vacuum testing to simulate the environment in space. The 1.1 tonne satellite is now scheduled to be shipped to the European spaceport in Kourou, French Guiana, in April.

The S2A launch by VEGA is scheduled in June.

Sentinel-2A will deliver optical images from the visible to short-wave infrared range of the electromagnetic spectrum from an altitude of 786 kilometres using 13 spectral bands with a resolution of 10, 20 or 60 metres and a swath width of 290 km. This combination is unprecedented in the category optical imagers.

Sentinel-2B, which is identical in design, is planned for launch mid-2016.

These two satellites orbiting the earth every 100 minutes will be able to capture images of our planet’s entire land surface in less than five days.


Use of Sentinel Earth Observation Satellites for Coastal Needs

With an uncertain future that includes climate change, sea level rise and increasing coastal populations, being able to make informed policy decisions in coastal zones will be critical for ensuring the well-being of citizens, the environment and the sustainability of economic activities.

Earth observation (EO) can be used to efficiently and systematically provide the key information needed to make these decisions. However, getting access to the right EO information can be a complicated and costly business, limiting availability.

However, the launch in April 2014 of the first Sentinel satellite from Europe's flagship EO program, Copernicus, represents a major advance in the availability of EO data, which has great potential to benefit numerous sectors involved in marine and coastal activities.

Copernicus (previously Global Monitoring for Environment and Security-GMES) is an EU-led initiative in partnership with the European Space Agency (ESA) that aims to aid decision making in a world facing increasing environmental and socioeconomic pressures. The program includes satellites with missions observing land, atmospheric and oceanographic parameters.

This space component comprises ESA's five families of dedicated Sentinels (launched between 2014 and 2020) and contributing missions from other space agencies.

In common with the NASA/USGS (U. S. Geological Survey) Landsat missions, access to Sentinel data is open, full and free to all.

This decision, very much appreciated by end-users, is part of the strategy designed to ensure the long-term sustainability of Copernicus.

Reuse of data will generate new businesses and jobs, while providing consumers with more choice and value for their money.

In line with this idea, Copernicus is more than just its space component. It is solidly built upon three other equally important pillars :

...
Indeed the opportunities for synergistic development of these generic services to provide value-added, user-specific downstream services in coastal zones are unlimited.

For example, a system to provide early warnings of marine toxic algal blooms for the aquaculture and fisheries industries that will help contribute to food security/safety is being developed by the ASIMUTH and AQUA-USERS projects.

Another example, already contributing to improvements in maritime safety and environmental protection, is radar satellite tracking of vessels and oil spills (CleanSeaNet and ARCOPOL), which enables the recognition of oil pollution, monitoring of accidental spills during emergencies and the identification of polluters.

A sector of growing interest, where Copernicus can potentially make an impact, is risk management and protection of coastal populations/assets.

Recent extreme weather events, such as the December 5, 2013 storm surge that affected eastern England, Hurricane Sandy in 2012 and Hurricane Katrina in 2005, as well as the recent severe flooding events in the southern U.K. and the Danube, have firmly underlined the very real human and economic costs of coastal flooding.

Indeed, studies suggest that the future global economic impacts of sea level rise and changing climate will be substantial. Hence, assessing these risks and providing inno- vative solutions to mitigate exposure is a very valuable endeavor.

However, none of these projects have been specifically designed to harness the power of Copernicus- until now.

...
Getting the Most out of Copernicus

This agile development concept is fundamental to all of the Copernicus services (generic and downstream), as stated in the mission brief by the European Parliament: "Copernicus should be user-driven, thus requiring the continuous, effective involvement of users, particularly regarding the definition and validation of service requirements."

Hence, to a large degree it is also up to the user community to help define and shape the services they need. To this end, FAST is in contact with a number of potential beneficiaries, ranging from small to medium enterprises (SMEs), such as consultancies and engineering firms, to environmental NGOs and governmental agencies.

The first consultations have yielded some interesting regional differences in requirements and expectations that are being introduced into the first demo version of the FAST services to be released in 2017.

Organizations, particularly SMEs, interested in learning more about the development of the FAST services are encouraged to make contact with the team via the project website.

One of the benefits to potential end-users from participating in service development is access to cutting-edge techniques that can provide advantages in terms of cost reductions and efficiency due to improvements in data gathering and decision making.

Overall, these benefits should be passed on to citizens as increased value for money and improved safety and wellbeing.

In the near future, growth in the availability of EO data is going to be exponential. Thus, the only potential limit on the vast capacity of Copernicus to stimulate knowledge-based services in coastal zones is the ingenuity of the global ocean community

New Ideas and Markets Emerging Based on Big Data from Space

is inviting all interested participants to submit outstanding ideas, applications, and business concepts involving innovative uses of Earth observation data by 13 July 2015. Along with cash prizes, the winners will receive access to a leading international network, corresponding data, start-up funding, and other support valued at more than EUR 300,000 in total.

The tremendous amounts of data produced by the European Earth observation programme Copernicus and its Sentinel satellites hugely benefit science and public authorities and open the door to countless products and applications in a wide array of business sectors. The European Space Agency (ESA) and Anwendungszentrum GmbH Oberpfaffenhofen (AZO) have thus initiated the Copernicus Masters competition to aid visionary entrepreneurs in bringing their innovations to market.
Laurent Simon 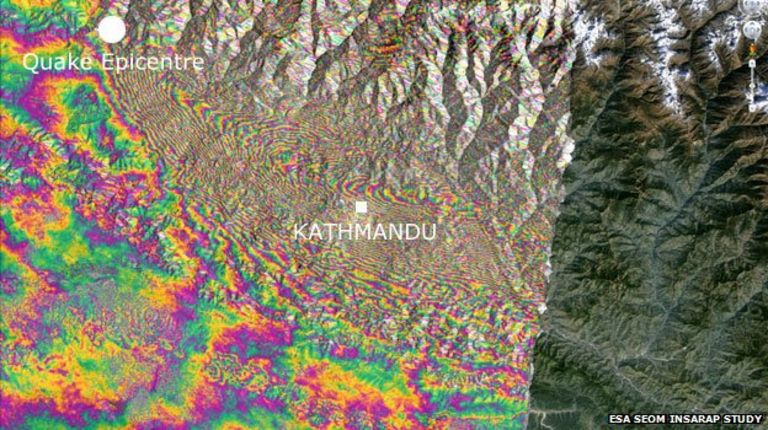 
Europe's Sentinel-1a satellite has got its first good look at the aftermath of Saturday's big quake in Nepal.

The radar spacecraft is able to sense ground movement by comparing before and after imagery acquired from orbit.

Scientists turn this information into an interferogram - a colourful, but highly technical, representation of the displacement that occurs on a fault.
The new data confirms an area of 120km by 50km around Kathmandu lifted up, with a maximum of at least 1m.

"There's a peak of slip just to the northeast of Kathmandu. Basically, what we do is count the coloured 'fringes' in this interferogram and there are about 34, so that translates to more than a metre of uplift," explained Prof Tim Wright from the UK's Nerc Centre for the Observation and Modelling of Earthquakes, Volcanoes and Tectonics (COMET).

Further to the north of the capital, the interferogram indicates that the ground subsided, which is exactly what would be expected following a shallow thrust.

Researchers can also see how the fault ruptured east from the epicentre, and did not break the surface.

This may indicate that not all the strain built up in the rocks prior to the earthquake was released in the magnitude-7.8 event and its subsequent aftershocks.

How The Nepal Earthquake Looked On Radar

[quote] On April 25th, a 7.8-magnitude earthquake struck Nepal, claiming over 5,000 lives and affecting millions more. Relief efforts are under way and satellite imagery is helping to visualize the damage but radar images from the ESA Sentinel-1A satellite showed why Nepal’s capital, Kathmandu, experienced so much damage

The maximum land deformation, shown in before and after pictures, is 8 miles away. The two acquisition dates lead to rainbow-colored interference patterns in the combined image, known as an ‘interferogram’, enabling scientists to quantify the ground movement.

Sentinel-1A’s swath width of 250 km over land surfaces has allowed for an unprecedented area size to be analyzed from a single scan. The entire area will be covered under the same geometry every 12 days, allowing for the wider region to be regularly monitored and fully analyzed for land deformation with the powerful ‘interferometry’ technique.

Sentinel-1A is the first satellite for the Copernicus environment-monitoring programme led by the European Commission. Its all-weather, day-or-night radar imagery is particularly suited to support impact assessment for many types of geohazards.

The satellite is planned to provide systematic observations of tectonic and volcanic areas at global level and Copernicus EMS was activated on the day the earthquake struck.

Interferogram over Kathmandu, Nepal, generated from two Sentinel-1A scans on 17 and 29 April 2015 – before and after the 25 April earthquake. Each ‘fringe’ of color represents about 3 cm of deformation. The large amount of fringes indicates a large deformation pattern with ground motions of 1 meter or more. Contains Copernicus data (2015)/ESA/DLR Microwaves and Radar Institute/GFZ/e-GEOS/INGV–ESA SEOM INSARAP study.
Laurent Simon

Nepal’s killer quake under the radar: Satellite images reveal how a huge area around Kathmandu has lifted up by more than 3 feet


Professor Wright says this suggests not all the strain in the rocks before the earthquake was released in during the catastrophic event.

Sentinel-1A's swath width of 155 miles (250km) over land surfaces has allowed for an unprecedented area size to be analysed from a single scan.


Scientists say the entire area will be covered under the same geometry every 12 days, allowing for the wider region to be regularly monitored for changes in the land.


Its ability to 'see' through cloud and rain and in pitch darkness make it particularly useful for monitoring earthquakes and for offering images for emergency response.

This is because it uses radar which works by sending out radio waves and timing how long it takes for them to reflect back.
Radio waves travel through air virtually unimpeded, but materials like metal, rock and water act almost as mirrors which can help reveal those areas inundated by floods. It also makes no different to radar if the Earth is in darkness.

The German Aerospace Center (DLR) used the satellite radar data to create a regional aid map and calculate how the ground shifted during the earthquake.

In the DLR map, areas that moved upwards are blue and regions that dropped down (away from the satellite) are coded yellow and red. In additional to vertical movements, the researchers also detected north-south horizontal shifts of nearly 7 feet (2 meters). (Image credit: DLR/EOC)
Poncho (Admin)

Scientists have reported the break of a huge part of Jakobshavn Glacier, one of the largest ones in Greenland. A chunk of it roughly the size of Manhattan broke some time between August 13 and August 19.
Laurent Simon

Scientists have reported the break of a huge part of Jakobshavn Glacier, one of the largest ones in Greenland. A chunk of it roughly the size of Manhattan broke some time between August 13 and August 19. 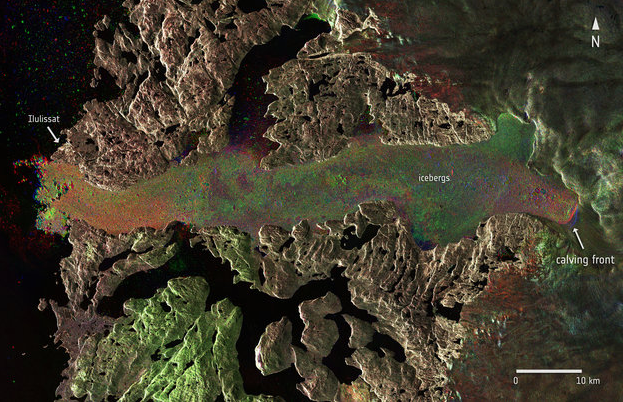 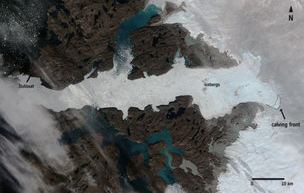