" Dubai-based Project Phoenix planned to deliver its first executive-configured CRJ conversion to owner Ritz Pacific by the end of last month. Completion of the modified regional jet was contracted to Peterborough, Ontario-based Flying Colours, which also has produced its own ExecLiner and Jetcorp Renaissance Series CRJ executive conversions.

The U.S.-registered Phoenix CRJ, formerly flown by Independence Air, will be
operated by Jet Asia of Macau. 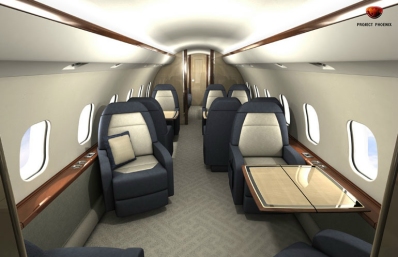 
Despite delay, CRJ1000 delivering on promises
By: Gregory Polek


Bombardier’s CRJ1000 ap-peared on track for certification soon after this week’s Dubai Air Show until the company announced a few months ago that a software glitch would force it to delay approval by the European Aviation Safety Agency (EASA) until the first quarter of its next fiscal year, starting February 1. Speaking with AIN in early September, Bombardier Aerospace vice president of commercial aircraft programs Ben Boehm declined to identify the equipment involved or name the manufacturer concerned, disclosing only that the problem resided in the airplane’s flight control system.

“I don’t want to get into the specifics of which part of the flight control system and which supplier,” Boehm told AIN. “In airplanes they’re all connected, anyway. One can’t work without the other.”

Happily for Bombardier, it found the problem during flight testing “earlier this year,” allowing it to pinpoint the area of concern with little difficulty and minimize the potential delay. “The nice thing is, when it happens in flight testing…the airplanes are instrumented to the gills, so you know exactly what’s causing the problem,” said Boehm. “It’s not about the software engineers having to second guess and, say, ‘What happens if we change this code, what happens when we change that code.’ The instrumentation on the airplanes [allowed us to] narrow it down to a few lines of code where there’s a problem. And then from there, that’s where you do your rewrite.”

Bombardier notified existing customers–France’s Brit Air and Spain’s Air Nostrum–as soon as it recognized it would need the extra time “There are no contentious issues with any of our customers on this either,” said Boehm, declining to comment on talks over compensation with the airlines.

Holding firm orders for 35 airplanes from Air Nostrum and 14 from Brit Air, Bombardier had just cut ties with a one-time third customer–Italy’s MyAir–after the Italian civil aviation authority (ENAC) lifted its operating certificate for financial reasons, effectively reducing the type’s firm order count by 15 airplanes. A deep downturn in the air transport sector has perhaps stunted the program’s sales growth, but the Bombardier vice president hasn’t let the relatively modest order count dampen his enthusiasm for the product, which, he said, has met every performance and weight para- meter during flight testing that the company established at the beginning of the program.

“We’ve got good correlation of data, so from a customer standpoint, they’re getting the airplane that we promised them,” said Boehm. “The best time to be developing an airplane is during that downturn because you can start delivering a brand-new airplane with all of these operational cost savings at the time when the upturn happens.”

For customers wanting even better field performance for hot-and-high operations, for example, GE will offer an optional 5-percent takeoff thrust increase in a version of the CF34-8C5 designated the CF34-8C5A2. Software modifications to the engine control will supply the added thrust, and new coatings and airfoil design modifications will help compensate for the extra demands placed on the high-pressure turbine. GE expects the enhancements to cut maintenance costs by up to 3 percent compared with the standard CF34-8C5.

Further mitigation of performance penalties come from some obvious changes to the CRJ1000’s wings, including a 7.5-percent trailing edge extension and a 26-inch wing tip extension, larger composite flaps and ailerons, and an extension to slat Number 3, located on the outboard end of the wing.

Although the CRJ700 and CRJ900 both use resin transfer molding (RTM) composites in their flaps, the CRJ1000’s new wings will allow Bombardier to take still more advantage of the weight savings through the switch from metal. To fully take advantage of the weight savings of composite flaps in the CRJ700 and CRJ900 would have required Bombardier to flight-test and recertify them, hence the reason the flaps in the NextGen version of those airplanes, introduced in 2007, weigh only marginally less than the metal ones in the original version.

Still, Boehm reckons that the more vital benefits of the composite parts center on maintenance. “Of course the more important part is the composite ones are
a little bit more durable from a wear-and-tear standpoint,” he said.

Further cost benefits will come from the use of what Bombardier calls a control-by-wire (as opposed to fly-by-wire) rudder control system, which, compared with the mechanical system on the rest of the CRJ line, will lower maintenance burdens because the system uses no rigging. “We went to that not so much for reliability, but maintenance costs,” he said. “You don’t have to rig a cable from the front to the back because now it’s just a wire as part of an electrical system.”

Boehm said that to use the term fly-by-wire constitutes a misnomer in this case because the system uses no intermediate computer, such as that planned for the fly-by-wire C Series. Essentially, whatever input the pilot gives the rudder pedal, a simple electrical signal tells the rudder what to do at the other end without the need for an intermediate processor used in a full fly-by-wire system.

Boehm said the new system in no way compromises maintenance commonality with the rest of the line because it literally removes a task from a mechanics’ list of chores. From a pilot’s perspective, “it changes nothing,” he added. “The feel of the airplane is the same; you still have the same feedback system on the rudder pedal as you had before.”

In fact, Bombardier plans to offer the system as a retrofit on the CRJ700 and CRJ900 at some point after the CRJ1000 gains certification, said Boehm.

While Bombardier has gone to great lengths to make the CRJ1000s flying characteristics virtually mirror those of its smaller siblings, once on the ground pilots will notice a difference in the airplane’s braking action thanks to a new carbon brake system–another first for the CRJ line. The new brake stacks, supplied by the UK’s Meggitt Aircraft Braking Systems, will of course weigh less than the steel brakes they replace. But, as with any switch from steel to carbon, pilots will need to use a different, perhaps counterintuitive, procedure to minimize wear.

“There is some new training that most airlines would apply to their pilots when they take a pilot from a steel brake to a carbon brake,” said Boehm. “Carbon brakes work better warm, so contrary to even how we all drive a car, you’re actually recommended to sit on the brake for a little bit and just kind of keep it warm–so its more of a technique than anything else.”

According to Boehm, the carbon brakes have worn as expected, “knowing of course that the CRJ1000 is a heavier airplane than the 900 or the 700, so it’s all proportional.”

Other changes include some structural strengthening and reinforced main landing gear to support 7,300 more pounds at mtow than the gear on the CRJ900. Finally, an enhanced Rockwell Collins ProLine 4 cockpit includes upgrades to the navigation system, the flight management system computers, displays, the navcom system “and how they all interface,” said Boehm. The package also includes upgrades to the engine indication system and the main data processor carries increased memory capacity, “which obviously all goes with the FMS as well,” said Boehm.

Scott also reiterated that the company expects to deliver the first CRJ1000 later this year and that the Q400X remains under consideration. “There is a lot of interest from our customers for the stretched version [of the turboprop]. There is a definite plan, but it has not yet been defined when we will launch it—maybe in the middle of the decade, or a bit further down. We will not shelve it.”

Bombardier has 49 firm orders for its CRJ1000, comprising 35 from Air Nostrum and 14 from Air France subsidiary BritAir. Air Nostrum CEO Carlos Bertomeu confirmed to ATW that he expects delivery of the first aircraft by the end of December or early January, noting that “owing to commercial reasons, with the Christmas holiday period in Spain extending until Jan. 6, we will commence commercial operations aboard the CRJ1000 somewhere in the middle of January.”

Bombardier gearing up for first CRJ 1000 deliveries Bombardier is adamant that the first CRJ 1000 will be delivered before the end of this year. It already has two aircraft that are ready while it awaits certification, following a delay in finalising the new rudder-by-wire software. CRJ programme director, Jean-
Guy Blondin, told Regional International during a factory tour last month that there are plans to roll out rudder-by-wire system to the other CRJ aircraft variants. He said that the factory at Mirabel, Quebec, Canada will build between 50 and 80 aircraft a year as demand dictates (with all the CRJ aircraft sharing the same final assembly hall). The plant has been designed to accommodate all three of the CRJ types; can have two fuselages being assembled in parallel; and it has five wing stations as well as three wing jigs. As of August Bombardier had, according to Blondin, “about eight” aircraft in the assembly hall and “about eight” having their interiors and paint applied. On average a CRJ takes 10 weeks to build. Blondin remained tight-lipped as to a delivery date for the first CRJ stating that it was down to the customers to announce the launches.


Nearly five months into its operation, the Bombardier CRJ1000 is beating previously advertised fuel burn by 4%.
Air Nostrum took delivery of the first CRJ1000 in December 2010, and currently operates five of the aircraft, according to the Flightglobal ACAS database. Brit Air, which currently operates seven CRJ1000s, took its first delivery around the same time.
Speaking at the RAA annual convention in Nashville, Tennessee on 18 May, Bombardier senior vice-president of aircraft programmes Eric Martel disclosed the better than anticipated fuel burn for the CRJ1000, which has resulted in a 6% range improvement for the aircraft.
Martel also cited "exceptional reliability" of the aircraft, highlighting the CRJ1000's 99.9% scheduled completion rate.
In March of this year Air Nostrum said it was pleased with the aircraft's performance, and noted the high reliability of the CRJ1000.
Speaking to ATI and Flightglobal regarding the CRJ1000 beating expectations, Bombardier vice-president of marketing Philippe Poutissou explained a little area was added to the CRJ1000's wing compared to the CRJ700/900 models and the aircraft's trailing edges were lengthened. He said Bombardier's engineers likely supplied conservative estimates how those changes would affect the CRJ1000's drag.
Poutissou stated the importance in aircraft development of not "being overly aggressive" in fuel burn targets, noting "it is expensive" to recover from a miss on fuel burn estimates, he said. 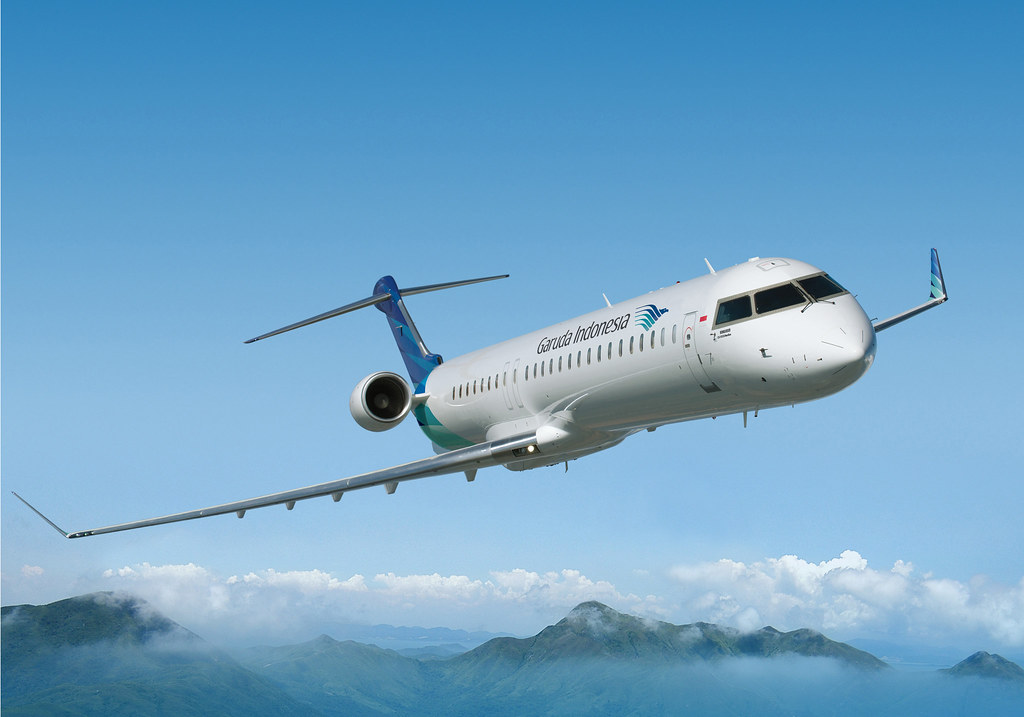