Another A380 order may be in the offing as well (China Southern Airlines already is a customer). Airbus President and CEO Tom Enders told this website at yesterday's delivery ceremony that he spoke with Air China executives about the A380 Monday, and Leahy added that CEA also has shown interest.


Thales announced that its Head-Up Display was certified by EASA on the A380 in single (left seat only) and dual configuration (left and right seats). Air France is launch customer.


Airbus may delay A380 deliveries

HAMBURG, Oct 30 (Reuters) - Airbus might delay delivery of one or two of the 13 superjumbo A380s scheduled for this year until January 2010, the European planemaker told Reuters on Friday.

The Toulouse-based aircraft manufacturer, a unit of European defence and aerospace group EADS, also said client financing remained difficult and it would take time for the business environment to return to normal.

"We are still aiming for 13 (A380) deliveries but one or two could come in January," Chief Operating Officer Fabrice Bregier told Reuters on the sidelines of a ceremony for the delivery of Air France-KLM's first A380.

"Everything will depend on airlines' capacity to take these planes at the end of the year," he said.

Air France-KLM has ordered 12 A380s. The first one will be put into service in November on the Paris-New York route.

Airbus's chief executive, Thomas Enders, also said on Friday it was "too early to relax" over customer financing and to believe it was guaranteed.

Customer financing helps airlines raise funds to order and take delivery of aircraft, but the past year's financial crisis has put pressure on traditional sources of credit.

Enders added the overall A380 delivery rhythm in the first half of 2010 should be "similar" to the current rate.

Airbus, just like Boeing, gets the bulk of payments for its aircraft on delivery. On the basis of catalogue prices, which can differ significantly from prices paid, an A380 can fetch $330 million.

However, faced with lower traffic, many airlines have been cutting capacity. Industry body IATA expects international airlines to suffer combined losses of $11 billion in 2009.

Two years on from its service debut, operators have told Flightglobal that the Airbus A380
has proved itself to be a crowd pleaser from a passenger point of view but suffers some frustrating technical problems.
This week's Flight International features our exclusive
A380 in-service report, in which launch customers Emirates, Qantas and
Singapore Airlines provide no-holds-barred overviews of the
double-decker's performance, while Airbus, Engine Alliance and Rolls-Royce give feedback on their experiences.
The general verdict is that the A380 has delivered a significant
operational boost to the airlines' marketing teams and has equalled or
bettered performance guarantees but continues to experience technical
delays caused by problems that Airbus acknowledges it should have got
on top of by now.
"We're busting our seams on the A380this aeroplane is a peach," says Emirates Airline
president Tim Clark, who adds that performance has beaten the
manufacturer's guarantees. "The faster the A380 flies the less fuel it
burns," he adds.

This is echoed by Qantas group executive operations Lyell Strambi
who says the aircraft has "met or exceeded" all the guarantees.
The airlines are united in their praise for Airbus's support, which
executive vice-president Tom Williams admits is running at a "heavier
level" than envisaged at this point in the programme.
The A380 has suffered the usual gremlins that crop up during early
operations, such as problems with sensors and some component failures.
However, the single most frustrating technical issue centres around the
warning system, which SIA and Emirates believe is too sensitive, and
results in misplaced fault messages.
Clark blames the problem on "overcomplex" software that has dragged
down the technical despatch reliability from the 98.5% target to the
"96-97%" level.
Airbus says it is working hard to address the problem and raise the
TDR to the target level, which Williams expects will be achieved by
mid-2010.
SIA, which has the largest A380 fleet and was the type's first
operator two years ago, says it has suffered some "teething problems"
with its Rolls-Royce Trent 900 engines, which has prompted a number of unscheduled changes.
R-R's head of marketing for Airbus programmes, Richard Keen, says
that SIA's "very precautionary approach" to its A380 operations, with
regard to any possible operational risks, "necessitated an extra engine
change or two".
However, he adds that all the teething problems have been "closed
out or contained" and that the Trent 900's "disruption index" is
running at 99.8% - in line with a mature Trent product. 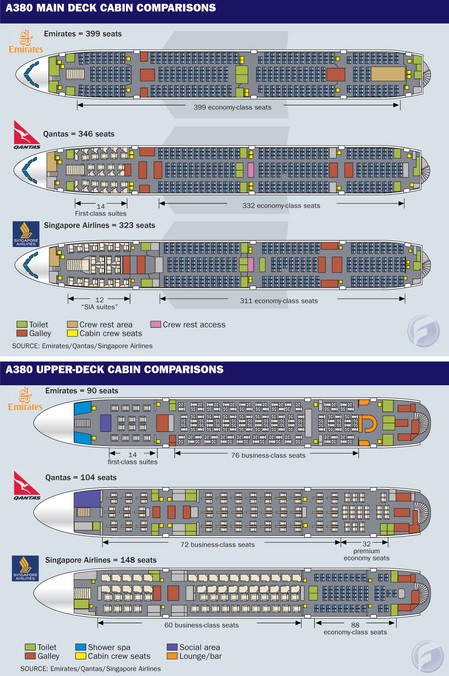 Singapore Airlines Engineering has completed the first 'C-check' on an Airbus A380 and hopes to do A380 heavy checks for other carriers.

The first 'C-check' has been completed and the aircraft worked on has local registration 9V-SKA, it says.

A second 'C-check' is due to be completed on another aircraft this year, it says, adding that next year there will be one 'C-check' in total.

The work this year is being done at an SIA Engineering Boeing 747 hangar but the company has a purpose-built A380 hangar under construction that is due to be completed next year, it says.

Completing heavy checks on A380s is a challenge because of the A380's height and "the electronic systems in the aircraft are very sensitive so keeping the aircraft cool is a challenge", says the company, referring to Singapore's tropical environment.

The other challenge is getting engineers classified to work on the A380, it says, adding that "many new tools are being used" and it was a challenge getting - within a short span of time - proficiency in using the tools.

SIA Engineering has spoken in the past with Qantas Airways about co-operating on maintenance of A380s but SIA Engineering's spokesman today declined to comment on this when contacted by ATI.

He was only willing to say, the company wants to do third-party A380 work and the work it can do for others includes A380: line and heavy maintenance, component maintenance and overhaul, technical training and engine changes.

SIA Engineering owns 100% of Aircraft Maintenance Services Australia which can support the A380 in major Australian airports, the company adds in its statement.

The airline operates the A380 to Sydney and Melbourne as well as to Hong Kong, London Heathrow and Tokyo.